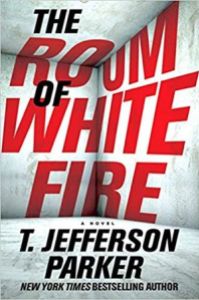 Roland Ford, the San Diego PI at the center of Parker’s powerful novel, at first seems out of central casting. He’s a widower with a dodgy work history and a taste for bourbon. The plot starts out smelling standard, too. Ford must find an escapee from a tony—$25,000 a month—sanatorium. But soon it’s clear that Parker is after bigger thematic game. Ford strolls the grounds with a patient who confides that those hovering hummingbirds are really surveillance drones. Refusing to dismiss the fellow as a nut, Ford climbs a tree to find out. Yup, drones. Then, when the patient says the missing man is out to bring “white fire to Deimos,” Ford doesn’t laugh it off. So he’s ready when it becomes clear that the cryptic phrase is the key to everything. The escapee has videos—hideous videos, described in powerful language—of Iraqi prisoners being tortured to little effect by mercenaries who “made a lot of money.” There have been other novels portraying the horror of torture, but this doubles down by casting the torturers as gleeful sadists who find their vocation “irresistible.” Chilling on multiple levels. Copyright 2017 Booklist Reviews.