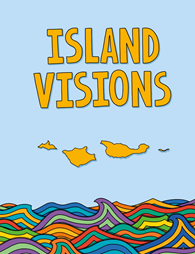 Add to Calendar Get Tickets - Free but must register for Zoom

A presentation with Jacob Seigel Brielle and Isaac Seigel-Boettner

Santa Barbara, CA, October 9, 2021 – The Santa Barbara Maritime Museum (SBMM) is proud to present “Island Visions,” a free Zoom webinar with brothers Jacob Seigel Brielle and Isaac Seigel-Boettner about their “un-textbook” and tome of wonder by the same name. This presentation about the Channel Islands and this special book will take place on Thursday, November 18, 2021, at 7 pm PT. The webinar is free, but registration is required, and donations are welcome. Register at: https://sbmm.org/santa-barbara-event/

Why A Book About the Channel Islands

Just off the California coast lies an island chain, often shrouded in fog and mystery, known as the Channel Islands. It is home to tiny island foxes found nowhere else on the planet, gigantic blue whales with hearts the size of cars, and towering underwater forests of kelp with more tenants than a skyscraper. Add to that ancient redwood canoe builders, land-hungry Spanish explorers, curious scientists, and enterprising urchin divers in search of a new type of gold. In short, it is a magical world, full of legends and natural beauty, inviting exploration of many kinds and from many angles—stories, poetry, science, geology, photography, and more. Inspired by a middle school trip to the islands, two Santa Barbara-raised brothers set out to share the magic and knowledge of many experts through their book, Island Visions.

Now, on November 18, those brothers—Jacob Seigel Brielle and Isaac Seigel-Boettner—will share the story of how Island Visions, a unique project and “untextbook” about the Channel Islands came to be. They will fill the evening with stories told through conversations, photography, and artwork from their new book, Island Visions, a tome of knowledge and tales from the finned, flippered, and footed sages who know these islands best. A seven-year effort that involved more than 40 scientists, fishermen, and other maritime and Channel Islands experts, the book is written for all ages but aims to introduce children to their local environment and the importance of conservation. In the book and their presentation, the brothers will take their readers and listeners beneath the waves, across the beaches, and behind the pages of what it was like to assemble this revolutionary story for explorers of all ages.

The 386-page hardback edition of Island Visions is jointly published by the authors Pedal Born Pictures, Santa Barbara Middle School, and Maps.com. It is available for purchase at SBMM’s Museum Store, online at https://sbmm.org/sbmm-store/?product-page=2, or Chaucer’s Books and Mollusk Surf Shop in Santa Barbara.

How is This Book Different?

Island Visions shares diverse voices from the past, present, and future that bring to life the importance of this tiny island chain on both a local and a global level. Beginning with the geography and geology of the islands and how they came to be, the book looks at the ocean from different perspectives, then moves on to the long history of people on the islands and their impact on the wildlife and health of the region now and in the future. Home to humans for over 10,000 years, the Channel Islands now serve as a model for how we can protect and conserve the most vulnerable spaces on our planet.

Jacob didn’t have a TV growing up. He was obsessed with books, fueled at least in part by countless evenings spent sifting through stacks of books in the aisles of Chaucer’s until closing—a tradition his parents had hoodwinked him and his brother Isaac into seeing as their preferred form of weekend family entertainment. Stories on the page took Jacob to new worlds and helped him better understand his own. After college, he and Isaac co-founded Pedal Born Pictures—a creative agency dedicated to shedding light on stories hiding in plain sight. Jacob edited the stories within the pages of Island Visions and wrote the musings that stitch them together. “On a ninth-grade outdoor expedition with Santa Barbara Middle School, we had the privilege of experiencing the wonders of the Channel Islands. We also met ocean filmmaker Mike deGruy who taught us that every place, every creature, has a story. Island Visions is our effort to help share these stories.” – Jacob Seigel Brielle

Isaac could often be found doodling in the margins of his notebook during class. That didn’t mean he wasn’t listening. While at Santa Barbara Middle School, he took a “junk art” elective, learning how to not burn himself with hot glue while building the worlds that existed within his mind. Now he works as the creative director at Pedal Born Pictures, translating stories and ideas into whatever medium best helps bring them to life. Isaac created all of the illustrations in Island Visions and fine-tuned the layout to make this multi-narrative collection sing.

This event is generously sponsored by Marie L. Morrisroe.