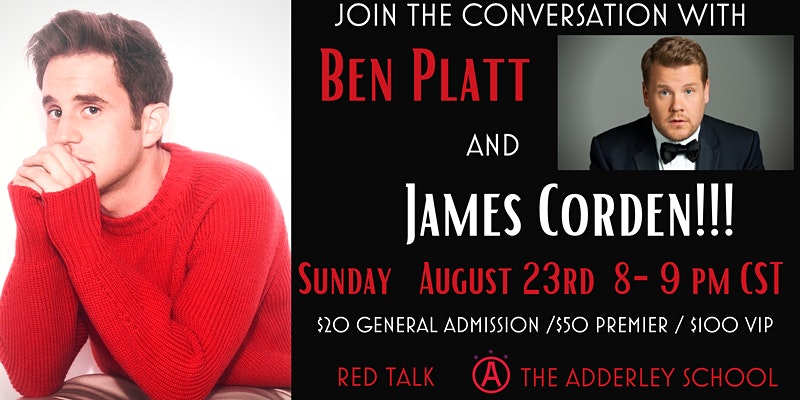 Join us for an intimate, uninterrupted hour with Ben Platt and James Corden. Proceeds to benefit the Adderley School Foundation… Empowering All Kids & Spreading Joy.

Ben studied at ADDERLEY for ten years, starting at age six, and has been hugely successful in his following years. A star on the Broadway stage, in film, and in the music industry, he truly is blazing a trail as bright as the sun!

Ben began his career in theatre as a child, appearing in The Music Man and Auntie Mame at the Hollywood Bowl, as well as the Broadway tour of Caroline or Change. He won over countless hearts in the role of Benji in the Pitch Perfect movie franchise. On Broadway, he starred as Elder Cunningham in Book of Mormon and as Evan Hansen in Dear Evan Hansen, having won the Tony award for Best Actor in a Musical.  As a recording artist, he released his debut album, Sing to Me Instead, in 2019 and appeared in Lin Manuel Miranda’s exquisite Hamildrops mashup, “Found/Tonight.” Since 2019, he has also starred in the Netflix comedy-drama series The Politician, for which he was nominated for the Golden Globe Award for Best Actor — Television Series Musical or Comedy.

You won’t want to miss this EXCLUSIVE ADDERLEY EVENT  on Sunday August 23rd, 8pm CST.  James and Ben will discuss Ben’s experience with ADDERLEY, his career since, and life lessons he’s gathered along the way!

“Not only did I make my most meaningful friendships at THE ADDERLEY SCHOOL, but it also really nurtured my love of Musical Theatre and planted this seed in me that has lasted my whole life. It taught me how to carry myself as a professional, invest in a character, and form a family with every show that I do.” – Ben Platt

$100/VIP Admission includes access to the event, access to a special VIP Pre-Show reception with Ben and James, an autographed photo of Ben, plus admittance to an exclusive silent auction of Ben Platt-autographed memorabilia!!!