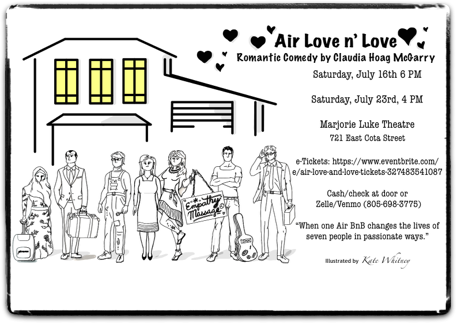 Peter, a very passionate abstract painter of 50 and his intellectual and more stoic daughter Claire, 26, run an Air B and B in California. Life is fairly normal until an Afghanistan refugee (Bojana) shows up at their door thinking she has rented and paid for the unit for two months. However, it is discovered she has been scammed out of the rent by a con artist. Peter is immediately wildly attracted to Bojana while Claire is toying with the idea of breaking it off with her boyfriend, Hank. Bojana somehow made it out of Afghanistan because her husband was an interpreter for the US Army but has gone missing and is believed dead. Bojana had her chance to leave the conflict filled country and she took it. Meanwhile, Peter’s ex, Lisa, is a demonstrative, outgoing sort who has just opened a massage salon nearby called Empathy Massage because her passion in life is empathy and love for others. Somehow her empathetic ear gets others to open up to her, especially Abdul, Bojana’s husband who suddenly shows up looking for his long lost wife. He is very much alive which causes Peter great distress.

A lot more adventure goes on including new loves, old loves and the end of love!