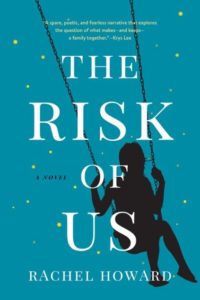 Please join us at Chaucer’s books as we welcome author Rachel Howard, in conversation with local author DJ Palladino. The Risk of Us, published by Houghton Mifflin this month is described as “…a poignant, dazzling debut novel about a woman who longs to be a mother and the captivating yet troubled child she and her husband take in.”

Howard was interviewed by Ira Glass for an episode of This American Life, when her first work, a memoir called The Lost Night, was published. She is a graduate of the MFA Program for Writers at Warren Wilson College and a fellow of the MacDowell Colony. Her fiction and nonfiction have appeared in Gulf Coast, Zyzzyva, Waxwing (nominated for a Pushcart Prize), O Magazine, the New York Times Magazine, Berfrois, the Arroyo Literary Review, the Los Angeles Review of Books, and elsewhere.

As a dance critic, her arts and dance writing has appeared in The New Yorker Online, the   New York Times, Ballet Review, Fjord Review, and the Hudson Review, among other publications.

Howard lives in Nevada City, CA, where she founded Yuba Writers’ Workshops, and a reading series, Yuba Lit, now a fiscally sponsored project of the Nevada County Arts Council. Yuba Lit is on hiatus until September 2019. During this time, Rachel is offering a donation-based guided community book club, “Reading Chekhov for Our Times.” The author also teaches through Stanford Continuing Studies, where she created a “Writing About Spirituality” course, with readings from a multiplicity of faith traditions.