In-Person: I Am My Power-Presented by Cottage Rehabilitation 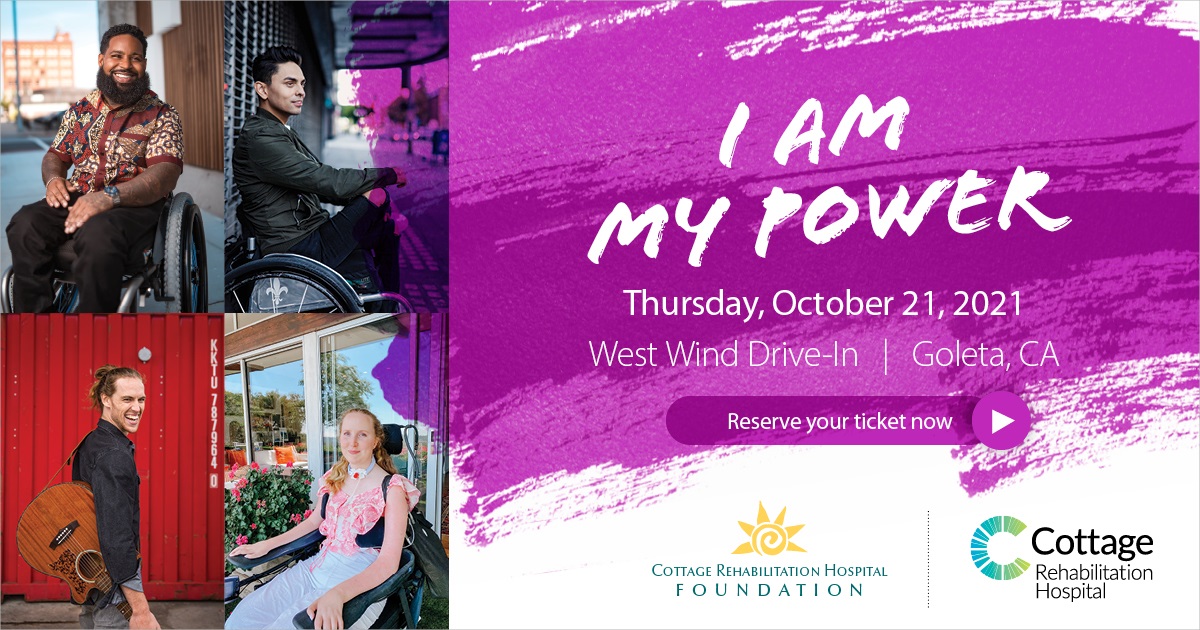 Cottage Rehabilitation Hospital Foundation (CRHF) presents an original film, I AM MY POWER. Follow four inspiring individuals as they face adversity, find their unique power, achieve great success, and go on to help others find and unleash their own powers.

The screening will be on Thursday, October 21, at 7 p.m. at the West Wind Drive-In, Goleta. Gates open at 6 p.m. Suitable for the whole family. Tickets must be purchased in advance. When you are outside your car: Please wear a mask and keep 6 feet of distance.

I Am My Power – Featured Individuals

Danny J. Gomez is an actor and model who suffered a spinal cord injury that forced him to reevaluate his life and goals. Through his fortitude and perseverance, he produced and starred in a number of award-winning shorts films for the Easterseals Disability Film Challenge annual competition, which has led to job opportunities, including a modeling campaign with Zappos Adaptive and a guest appearance on NBC’s New Amsterdam. He hopes to continue to be a positive force advocating for the disability community in the entertainment industry.

Grace Fisher is a native of Santa Barbara. A skilled musician; playing piano, cello, and guitar, she was accepted to Berklee College of Music. However, during her senior year of high school, Grace’s spine was ravaged by a virus leaving her paralyzed from the neck down. She was diagnosed with Acute Flaccid Myelitis and sent to a rehabilitation hospital where she was introduced to music therapy and adaptive art. This not only helped strengthen her neck but also helped heal her mind and soul.

When approached by the Make-A-Wish Foundation in Santa Barbara, Grace’s wish was to help children with disabilities through art and music. This led to her creating the Grace Fisher Foundation. Grace is currently studying music composition at UCSB. Her music has been played by the Santa Barbara Youth Symphony, Santa Barbara Strings, and most recently, the Solstice Chamber Orchestra.

In 2020 a documentary, AMAZING GRACE, was made following Grace’s journey and how family, community, and passion for music transformed Grace Fisher from quadriplegic to composer.

David Francisco is an accomplished singer, songwriter, musician, producer, recording engineer, and spinal cord injury survivor. Three weeks after moving to Nashville to attend the world-renowned Blackbird Academy to enhance his producing and engineering skills, tragedy struck. In April 2016 while riding his bicycle David was hit by a distracted driver. His back snapped, his spinal cord severely damaged and his left forearm badly injured.

The following year consisted of full-time physical therapy and rehabilitation where David focused all of his efforts on regaining any possible mobility. He returned to Nashville nine months later and graduated from the Blackbird Academy in June 2017. After graduation, he auditioned for American Idol and went all the way to Hollywood week. His audition was televised and viewed more than 56 million times around the world. David has performed on stage with Martina McBride, Steven Curtis Chapman and opened for The Voice winner, Chris Blue.

He has shared his story at the Grammy’s annual MusiCares Foundation Gala and in-person with Katy Perry and Kacey Musgraves. He has written a book and album about his journey called LIONHEART, which can be found on his website davidfranciscomusic.com.

Wesley Hamilton is an award-winning athlete, speaker, model, and 2021 CNN Hero. Wesley is the founder and executive director of the nonprofit Disabled But Not Really (DBNR) who works to bring positivity and hope to the disability community and beyond.

Gunshot wounds left Wesley with a spinal cord injury, in a wheelchair, and deeply depressed. However, as a single father to a young daughter, he found his way out of depression through fitness and nutrition. He became empowered. His passion for DBNR is evident by its growth and expansion. DBNR joins community events to raise awareness about the role of good mental and physical health in overcoming life’s challenges.

I AM MY POWER – Your Power Explorer

Nicole Evans is an actress, writer, and disability rights and inclusion activist. Born with Osteogenesis Imperfecta, Nicole is a full-time wheelchair user. Nicole was selected as one of the Top 20 Actors from Historically Underrepresented Communities in 2020 by the Casting Society of America. She can currently be seen in her recurring roles on Good Trouble, Superstore, and Special.

Most recently, Nicole was featured in Forbes where she spoke about her journey towards breaking into Hollywood with a disability. In 2019, Nicole won Best Actor at the Easterseals Disability Film Challenge for her role as Dr. Hubbert in Human Helper.

Additionally, Nicole created her very own character, Dr. Vickie Ziegler, in her original series Shortcomings. In 2019, the pilot script for this series that she co-wrote with her writing partner, David Crabtree, was selected as one of the Top 10 scripts featuring a character with a disability on The Black List.

Nicole is a graduate of the Gold Rising Program through the Academy of Motion Picture Arts and Sciences.