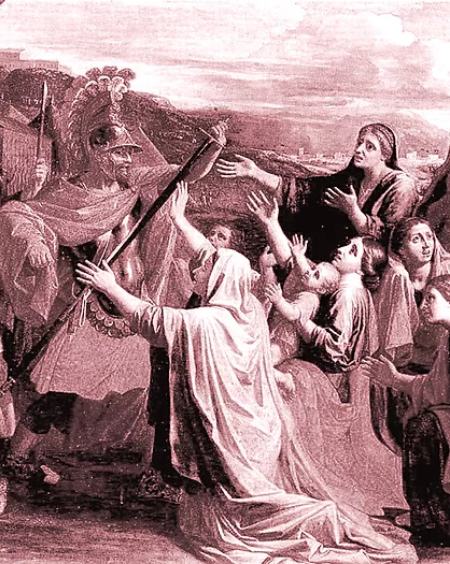 Although more than four of Shakespeare’s plays are set in Roman times, four are set either in Rome itself or wherever large events, the results of forces variously centrifugal and centripetal, decided the fate of Roman power at any given moment.   Three of his plays take place in the historical hurly-burly of the Roman Republic, over a nearly 500-year period from its early days to its smashing collapse a few decades before the Christian era. One of these three, Coriolanus, is set in early Republican Rome; the other two, Julius Caesar and Antony and Cleopatra, at the end of it.  The other of the four, Titus Andronicus, is set in a shadowy, largely fictional world of late Imperial Rome, in a time that would have been, chronologically, long after the other three. Titus, set the latest, nevertheless appears to be the first Roman play Shakespeare wrote, and is the least accomplished as a work of art. The three mostly historical plays draw their material directly from Plutarch’s Lives, that biographical treasury of the ancient world; Titus, unsurprisingly, does not – indeed, could not. To read these four plays, interspersed with the corresponding Roman lives to be found in Plutarch preceding each play in turn, may afford an illuminating perspective on some fascinating Romans and the ways in which they have come down to us.  Except for Titus, which, though chronologically last, will be read first, the reading of the lives and plays will circle back after Titus to the early Republic to follow the historical chronology of the stories they tell.  Thus, the seven seminars (four on Shakespeare, three on Plutarch) in the series: Titus Andronicus, Plutarch’s Life of Coriolanus, Coriolanus, Plutarch’s Lives of Caesar and Brutus, Julius Caesar, Plutarch’s Life of Antony, Antony and Cleopatra.

Online. Register to receive the link.