Why do so many U.S. scientists continue to lean on the language of apolitical science, even as political leaders display less and less interest in scientists claims to expertise, or even the existence of facts?

In a new book, Freedoms Laboratory: The Cold War Struggle for the Soul of Science, historian 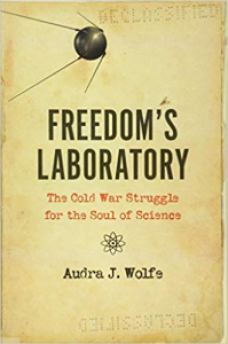 suggests the answer lies in Cold war propaganda. From the late 1940s through the late 1960s, the U.S. foreign policy establishment saw a particular way of thinking about scientific freedom as essential to winning the global Cold War. Throughout this period, the engines of U.S. propaganda amplified, circulated, and, in some cases, produced a vision of science, American style, that highlighted scientists independence from outside interference and government control. Working (both overly and covertly, wittingly and unwittingly) with governmental and private organizations, U.S. scientists tried to come to terms with the meanings of scientific freedom and U.S. ideology. More often than not, they ended up defining scientific values as the opposite of Communist science. Science, in this view, was apolitical. The Cold War ended long ago, but the language of science and freedom continues to shape public debates over the relationship between science and politics in the United States.

Audra J. Wolfe, Ph.D. is a Philadelphia-based writer, editor, and historian. She is the author of Freedoms Laboratory: The Cold War Struggle for the Soul of Science (2018) and Competing with the Soviets: Science, Technology, and the State in Cold War America (2013). Her articles have appeared in both scholarly and more popular venues, including the Washington Post, The Atlantic.com, Slate, and the popular podcast American History Tellers. Wolfe holds a Ph.D. in the History and Sociology of Science from the University of Pennsylvania (2002). Previously, she studied biochemistry and chemistry at Purdue University (B.S., 1997). She has taught courses on Cold War science as well as science and the media    at the University of Pennsylvania.

As a publishing professional, Wolfe has worked at the University of Pennsylvania Press, Rutgers University Press, and the Chemical Heritage Foundation, where she additionally served as executive producer for an award-winning podcast, Distillations. Her editorial and publishing consulting company, The Outside Reader, supports the work of scholars and scholarly publishers. Additional information and a full CV are available on Wolfes website, http://audrajwolfe.com. She tweets @ColdWarScience. Cosponsored by the Lawrence Badash Memorial Lecture Fund and the IHCs Machines, People, and Politics Research Focus Group