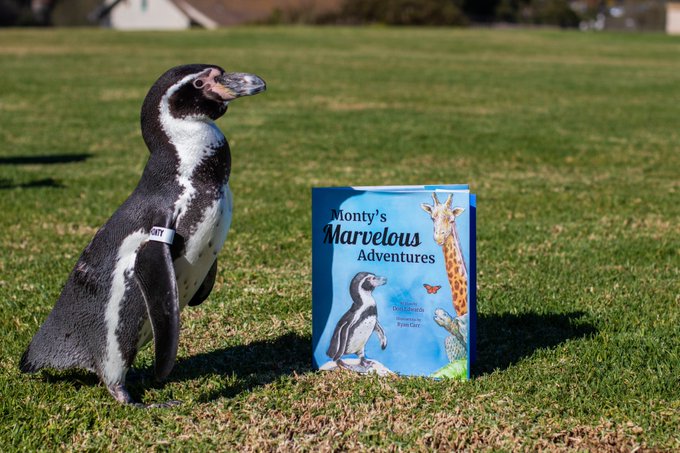 On Sunday, March 28 at 3:30 pm (Pacific) Chaucer’s Virtual Author Discussion hosts children’s author Dori Edwards who will read from the Santa Barbara Zoological Gardens’ children’s book MONTY’S MARVELOUS ADVENTURES!  Later in the program, she will be joined by a Special Guest (hint hint)

*Please note that this event is limited to 100 people on a first come, first served basis.  A recording will be available on our YouTube channel shortly after program’s completion .

The world may seem big to Monty the penguin, but his personality is bigger. When Monty gets invited to go on an adventure with his favorite human, zookeeper Ellie, he waddles at the chance! From the comfort of his rocky island to the jungles, savannas, and deserts of the Santa Barbara Zoo, Monty meets some of the strongest, slowest, and tallest animals. As he learns that being different is beautiful, he teaches us what it means to accept yourself and others.

About the Author, Dori Edwards

If Dori could be anywhere, it would be in the great outdoors, breathing, healing, and loving life. Hiking with her parents and learning from her dog “siblings” inspired her to commune with wild things, listening to what they can teach us. After graduating from UCLA, Dori followed her love of teaching and nature to lead kids on wilderness adventures. She became Marketing Coordinator at the Zoo, where all her loves came together when she was introduced to a new friend – Monty the penguin. He lived, she listened, she watched how he taught people about joy, love, acceptance – and she wrote.

About the Illustrator, Ryan Carr

Ryan Carr earned his BFA in Illustration from the Minneapolis College of Art and Design and his artistic interests lean to more natural subjects with an emphasis on drawing and fine line detail. He has shown his work in New York, L.A., Sacramento, Minneapolis, and Seattle, and has been featured in Beautiful Decay and New Art Review magazines. Ryan works as a freelance illustrator and muralist in southern California and is currently artist-in-residence for the Romero Foundation in Pittsburgh. He recently became the first artist-in-residence for the Museum of Ventura County.

About The Santa Barbara Zoo

The Santa Barbara Zoo is open!. Known as one of the world’s most beautiful zoos, the Santa Barbara Zoo is located on 30 acres of botanic gardens and is home to more than 500 individual animals in open, naturalistic habitats. The Santa Barbara Zoo is accredited by the Association of Zoos & Aquariums (AZA), representing the highest level of animal care, and participates in AZA endangered species programs for Masai giraffe, California condor, island fox, and Western lowland gorilla, among others. As a private 501(c)(3) nonprofit corporation, the Santa Barbara Zoo depends on community support, not tax dollars, for operations and improvements. Visit sbzoo.org.