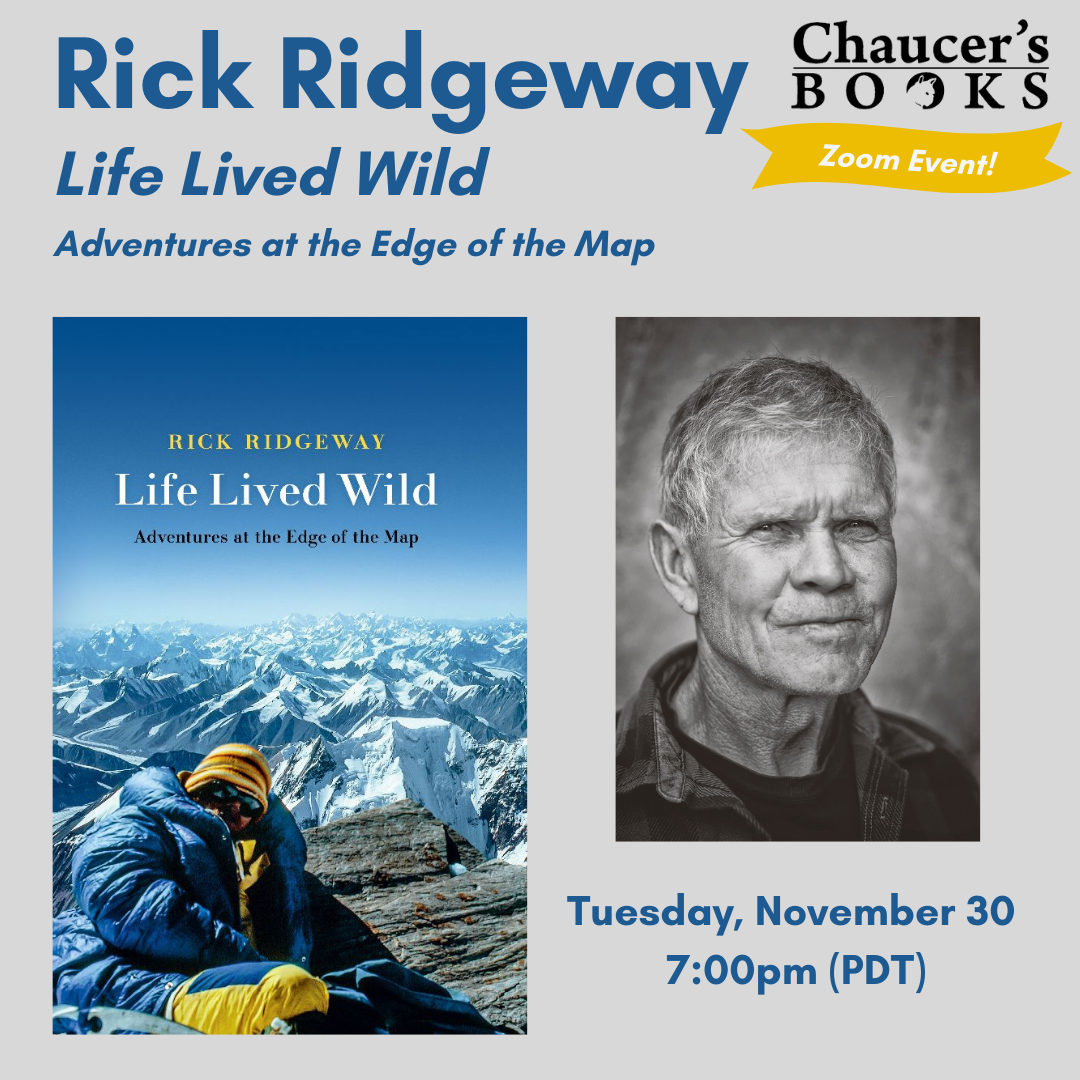 Mountain climber and author Rick Ridgeway will speak with Chaucer’s Books about his latest book LIFE LIVED WILD, ADVENTURES ON THE END OF THE MAP on Tuesday, November 30 at 7 p.m.

To attend this virtual event, please click here: https://us06web.zoom.us/j/89852613249
To watch this event on YouTube, please click here: https://www.youtube.com/channel/UCRVxV4ZOqkmnBj8TvT25NFQ
A life worth living is lived at the edges where it is wild
At the beginning of his memoir Life Lived Wild, Adventures at the Edge of the Map, Rick Ridgeway tells us that if you add up all his many expeditions, he’s spent over five years of his life sleeping in tents: “And most of that in small tents pitched in the world’s most remote regions.” It’s not a boast so much as an explanation. Whether at elevation or raising a family back at sea level, those years taught him, he writes, “to distinguish matters of consequence from matters of inconsequence.” He leaves it to his readers, though, to do the final sort of which is which.
Some of his travels made, and remain, news: the first American ascent of K2; the first direct coast-to-coast traverse of Borneo; the first crossing on foot of a 300-mile corner of Tibet so remote no outsider had ever seen it. Big as these trips were, Rick keeps an eye out for the quiet surprises, like the butterflies he encounters at 23,000 feet on K2 or the furtive silhouettes of wild-eared pheasants in Tibet.
What really comes through best in Life Lived Wild, though, are his fellow travelers. There’s Patagonia founder Yvon Chouinard, and Doug Tompkins, best known for cofounding The North Face but better remembered for his conservation throughout South America. Some companions don’t make the return journey. Rick treats them all with candor and straightforward tenderness. And through their commitments to protecting the wild places they shared, he discovers his own.
A master storyteller, this long-awaited memoir is the bookend to Ridgeway’s impressive list of publications, including Seven Summits (Grand Central Publishing, 1988), The Shadow of Kilimanjaro (Holt, 1999), and The Big Open (National Geographic, 2005).
Previous Event Next Event