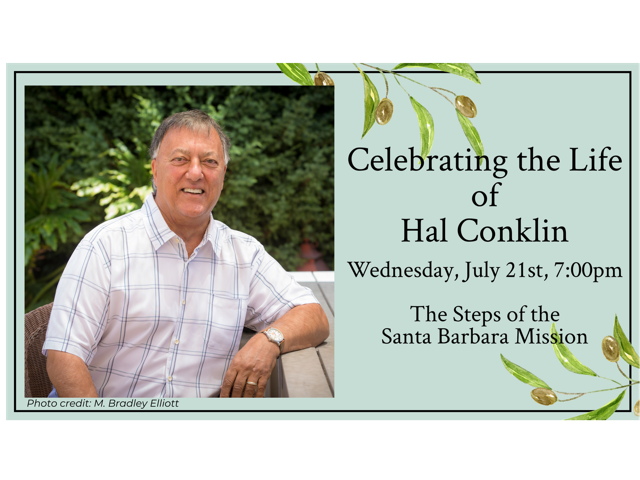 The Santa Barbara community is invited to spend an evening in remembrance of Hal Conklin, whose life has left a lasting impact on so many near and far. Hal was a beloved public servant, friend, family man, and leader whose devotion to Santa Barbara has left a lasting impact. He served as city Mayor from 1993-1994 and on the City Council from 1977-1993, and he helped found the Community Environmental Council, of which he was also a former executive director. Hal was instrumental in the reopening of Stearns Wharf,  the extension of Chase Palm Park, the building of Paseo Nuevo, and the restoration of the Granada Theater. The Granada Theater offered this fond tribute to Hal’s life: he was the “heart” of Santa Barbara. Hal’s love for the arts also extended to his work as a co-author for a weekly film commentary called Cinema in Focus where over 1,500 reviews have been published.

The public is invited to join us at the steps of the Mission on Wednesday, July 21, at 7 pm.  Provided seating is limited, so for your own comfort please bring a blanket or lawn chair, jacket, or mask, as needed.

In lieu of flowers, gifts can be made to the Free Methodist Church of Santa Barbara with the memo “Hal Conklin Memorial.” Memories and photos of Hal can be shared with the family at https://www.newlywords.com/hal-conklin-memorial using the access word “Conklin.”  Memories and photos will be honored and preserved for the Conklin family.