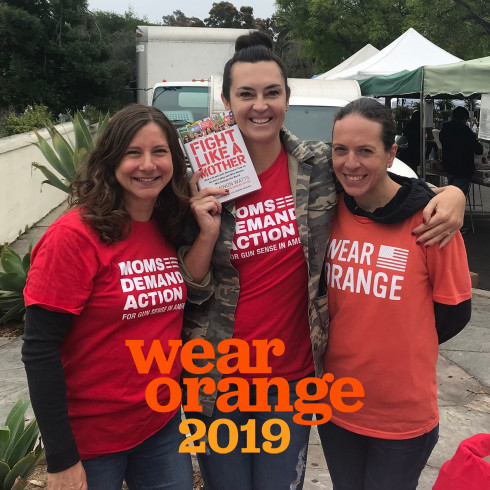 MOMS DEMAND ACTION TO HOST DAY OF SERVICE FOR WEAR ORANGE WEEKEND
Saturday • June 8 • 11 am – 2 pm • Transition House
The Santa Barbara Chapter of Moms Demand Action will host a Day of Service at Transition House in honor of Wear Orange, the national gun violence awareness weekend, on Saturday June 8, 2019.
Orange is the color that Hadiya Pendleton’s friends wore in her honor when she was shot and killed in Chicago at the age of 15 — just one week after performing at President Obama’s 2nd inaugural parade in 2013. Since then, orange has been the defining color of the gun violence prevention movement. The color orange honors the more than 100 lives cut short and the hundreds more wounded by gun violence everyday.
In a time when attending school has become more deadly than serving in the active military, Moms Demand Action will be hosting thousands of events across the nation to raise awareness about gun violence. Locally, the Santa Barbara chapter of Moms Demand Action will be restoring the chalkboard wall and renovating the sandbox at Transition House on Saturday, June 8 from 11 am until 2 pm.
Transition House is dedicated to the solution of family homelessness in the Santa Barbara community, including survivors of gun violence and domestic abuse.
With over 6 million supporters, Moms Demand Action is a national, non-partisan advocacy group fighting for gun violence prevention. The new Santa Barbara chapter was co-founded in December 2018 by local moms and activists Emily Engel and Kendall Pata.
Moms Demand Action will also be present at the Wear Orange press conference on Friday, June 7 at 12 pm at De la Guerra Plaza.
For more information, please visit:
https://www.transitionhouse.com/
https://momsdemandaction.org/
We’re Turning America Orange
Previous Event Next Event