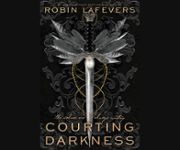 ROBIN LA FEVERS COURTING DARKNESS Sunday, March 31st at 2:00 pm First in a duology, this darkly thrilling page-turner set in the world of the best-selling His Fair Assassin series is perfect for fans of THRONE OF GLASS, RED QUEEN, and GAME OF THRONES. Told in alternating perspectives, when Sybella discovers there is another trained assassin from St. Mortains convent deep undercover in the French court, she must use every skill in her arsenal to navigate the deadly royal politics and find her sister in arms before her timeand that of the newly crowned queenruns out. *Kirkus starred review– ‘Sharp and breathless, full of anger and strength. May the sequel hurry.’ *Publishers Weekly starred review– ‘LaFeverss blood-soaked, machination-riddled tale captivates as its fierce, passionate, intelligent female characters examine issues of agency and empowerment, freedom, and sisterhood.’ * School Library Journal starred review– ‘Both thoroughly developed female protagonists are models for young women individuals of strength and power…A first-purchase gem of historical fantasy for high school and public libraries that will delight fans and engage newcomers.’ Robin La Fevers is a long-time resident of Carpinteria, California, and a frequent customer at Chaucer’s Books! Though she has never trained as an assassin or joined a convent, she did attend Catholic school for three years, which instilled in her a deep fascination with sacred rituals and the concept of the Divine. She has been on a search for answers to lifes mysteries ever since.