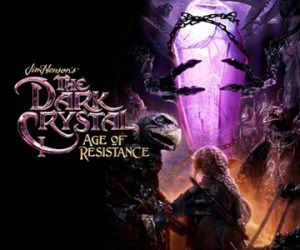 A prequel to Jim Hensen’s beloved 1982 fantasy film, The Dark Crystal: Age of Resistance (2019) builds on Henson’s original worldbuilding premise and maintains its devotion to stunning puppetry. The evil Skesis are the overlords of the planet Thra; when their repeated harvesting of the planet’s lifeforce pushes the world dangerously out of balance, a hodgepodge group of brave Gelfling unites to save their planet from ecological corruption. The series offers a broader view of the environment of Thra, exploring the relationships between plant, animal, and crystal species. The pilot episode “End. Begin. All the Same.” introduces Rian (Taron Egerton), Brea (Anya Taylor-Joy), and Deet (Nathalie Emmanuel), representatives of three Gelfling tribes who will spark a rebellion against their Skeksis rulers. A long-term labor of love for its creators, the series’ talented voice cast including Mark Hamill, Simon Pegg, Lena Headey, Awkwafina, and Keegan Michael-Key.

Executive Producer/Director Louis Leterrier will join moderator Emily Zinn for a post-screening discussion of the series’ sophisticated use of puppetry.

This event is sponsored by the Carsey-Wolf Center and Netflix.