Virtual Discussion: Author Talk with Bonnie Tsui (Why We Swim) 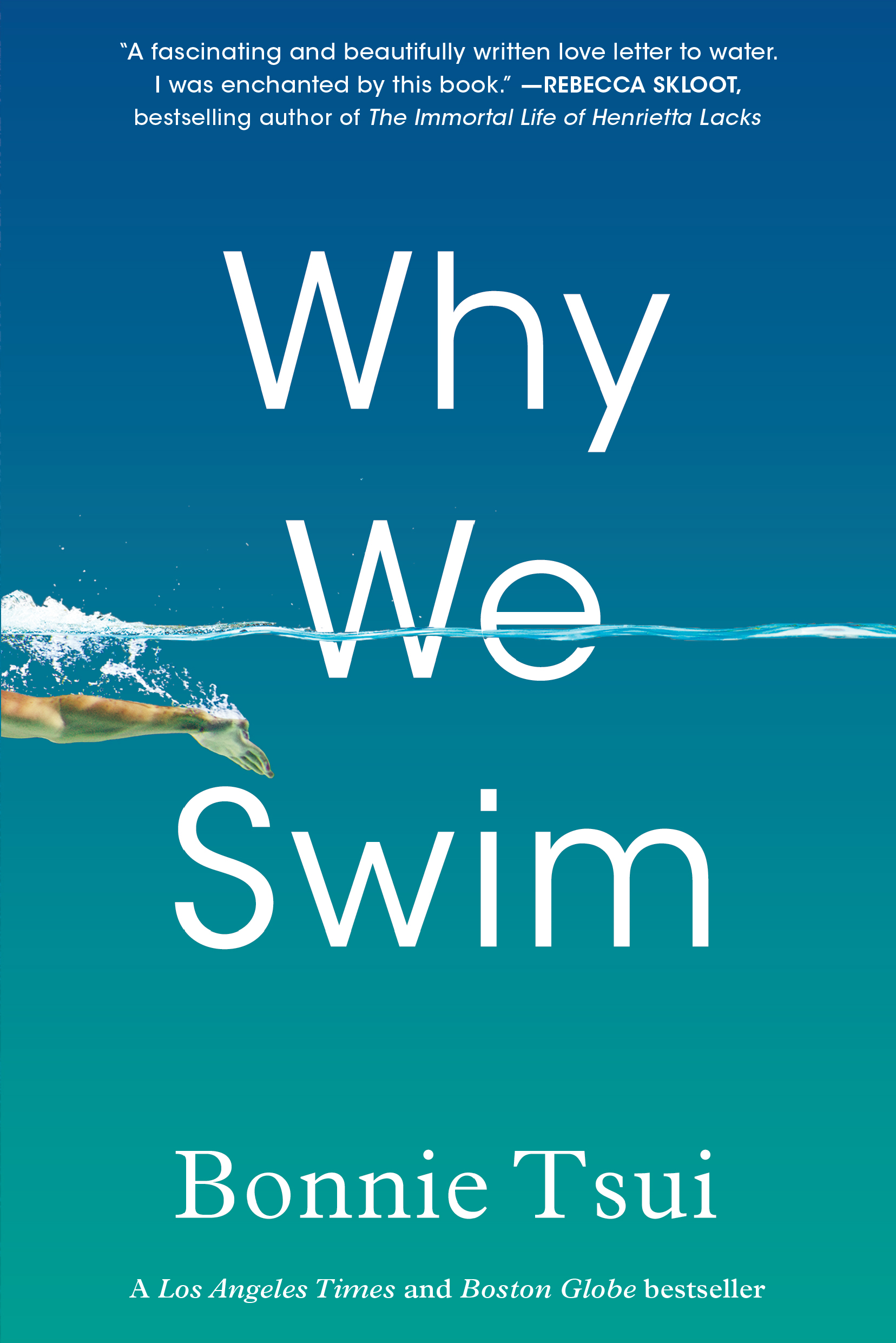 Chaucer’s Books Virtual Author Discussion with Bonnie Tsui, the bestselling writer of WHY WE SWIM (Algonquin Books) on Tuesday, April 13 at 5:30 pm. Bonnie will be joined by television producer Caitlin Roper, the Executive Producer, Scripted Film & TV at The New York Times, an avid swimmer.

“An enthusiastic and thoughtful work mixing history, journalism, and elements of memoir… We’ll never be the fish, Tsui reminds us. ‘But we get glimpses of what it’s like to be the fish. We get flashes of forgetting the water.’ How glorious.”
The New York Times Book Review

Humans, unlike other animals that are drawn to water, are not natural-born swimmers. We must be taught. Our evolutionary ancestors learned for survival; now in the 21st century we swim in freezing Arctic waters and piranha‑infested rivers to test our limits. Swimming is an introspective and silent sport in a chaotic and noisy age, it’s therapeutic for both the mind and body, and it’s an adventurous way to get from point A to point B. It’s also one route to that elusive, ecstatic state of flow. These reasons, among many others, make swimming one of the most popular activities in the world.

Why We Swim is propelled by stories of Olympic champions, a Baghdad swim club that meets in Saddam Hussein’s palace pool, modern‑day Japanese samurai swimmers, even an Icelandic fisherman who improbably survives a wintry six‑hour swim after a shipwreck. New York Times contributor Bonnie Tsui, a swimmer herself, dives into the deep from the San Francisco Bay to the South China Sea, investigating what seduces us to water, despite its dangers, and why we come back to it again and again. She offers an immersive, unforgettable, and eye-opening perspective on swimming—and of human behavior itself.

In 2009, her book American Chinatown: A People’s History of Five Neighborhoods was published by Simon & Schuster’s Free Press; it won the 2009-2010 Asian/Pacific American Award for Literature and was a San Francisco Chronicle bestseller and Best of 2009 Notable Bay Area Books selection. She has been the recipient of the Lowell Thomas Gold Award for travel journalism and the Jane Rainie Opel Young Alumna Award at Harvard University. In 2017, she was awarded the 2017 Karola Saekel Craib Excellence in Food Journalism Fellowship by the San Francisco Chapter of Les Dames d’Escoffier. She also received a 2019 National Press Foundation Fellowship and a 2010 and 2021 Mesa Refuge writing residency.

A longtime contributor to The New York Times, Bonnie has also performed numerous times at Pop-Up Magazine and other live storytelling events. She helped to launch F&B: Voices from the Kitchen, a storytelling project from La Cocina that shares stories from cooks and kitchens that are less often heard. She also appeared as a talking head in the documentary The Search for General Tso, to explain the curiously foreign-yet-familiar quality of Chinese-American food, and was featured in the History Channel series “America: Promised Land.”

Bonnie lives, swims, and surfs in the Bay Area and is a member of the San Francisco Writers’ Grotto. Her new book, Why We Swim, was published by Algonquin Books in April 2020; it received praise from The New York Times, The San Francisco Chronicle, The Los Angeles Times, NPR, Booklist, Kirkus, and more, and is one of TIME magazine’s 100 Must-Read Books of 2020. It is currently being translated into seven languages. Bonnie’s first children’s book, Sarah and the Big Wave, about big-wave women surfers, will be published by Henry Holt Books for Young Readers in May 2021.

She also hopes, as Oliver Sacks writes in “Water Babies,” to “swim till I die.”