On the morning of May 21, 2019 Dolores Elaine Sutton left us on her terms.  She was at her favorite place, her home.  Dolores was born in Alameda, California on March 25th, 1927 to Victor and Cova Susan Bargas. Soon after she moved with her mom and brother to Hollywood, California to be closer to family.  It was there she spent her childhood and was soon known as “The prettiest girl at Hollywood High”.  She worked as an usherette for the Paramount Theater. She loved to tell stories of Gary Cooper & all the stars she seated when they came to see their films.

During the war, her mom a telephone operator, was temporarily transferred to San Pedro.  It was there she met a handsome young sailor, Henry (Hank) Sutton.  The two fell in love and were married May 8, 1945, the day the war ended. A year later their first daughter Sandy was born. Their family continued to grow with the addition of their son Bob and later daughter Toni.

Rarely appropriate but always hilarious, Dolores was a classic Hollywood beauty and an exceptionally glamorous woman with a feisty sense of humor and a big affinity for life. There were so many things that would make us all laugh.  Things we call “Doloresisms.”  Her infectious laughter and wit kept her family and friends in constant hysterics. There was a time when she was concerned about giving her dog “Buddy “pain pills because she didn’t want him “to become addicted like Elizabeth Taylor!”   She thought Yahtzee was a form of Karate. How many grandmothers do you know who rocked red leather hot pants at 50? Only one, and we miss her. There will never be another like her. Her stories were timeless & we miss them.

She loved all animals, a legacy we carry on. She rescued many animals, often bringing home the ones no one else wanted. Dolores loved and was proud of the family that she and Hank created. As you know, time waits for no one, and her youthful spirit struggled to compete with an aging body. She said more than once, “Old age was worse than polio.”

We are eternally grateful to all of her friends who reached out with kind words, flowers, or knowingly donated to various animal charities. A celebration of life will be held at a later date. You’d think we would be more prepared to say good-bye after her 92 years, but it has taken months to put this obituary together. 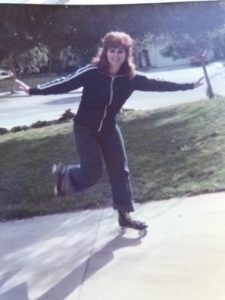 Perhaps her life is best summed up with her own words: “Don’t take life too seriously. It’s not permanent. “