On March 5, friends and family came together at Comforts of Home Senior Care in Goleta to celebrate the 102nd birthdays of June Francis and Helen Schrumpf. While the day was gray and rainy, spirits were up in the packed living room of the home. Both Francis and Schrumpf were vibrant a’nd welcoming, chalking up their longevity to “good genes,” they said.

“Both chalked up their longevity to ‘good genes.’”

Schrumpf was born on January 30, 1917, in Kansas. Later on, she met her late husband in high school in Orland, California. Later, after their two daughters were grown up, the couple moved to Ventura to be closer to the girls and their families. Schrumpf’s daughter Diana Jauchen describes her mother as giving and loving toward both people and animals. For most of her life, Schrumpf has enjoyed playing the piano, just as her mother before her did. Today, Schrumpf is a member of the Santa Barbara Music Club and, up until about two years ago, could be found playing the organ for weekly services in her retirement home’s church.

Francis was born in Fort Dodge, Iowa, and eventually moved to Burbank to attend school. Afterward, Francis spent 23 years working at Lockheed Aircraft, but she admits she wasn’t one of those famous female riveters of the time. After her brother and his family relocated to Santa Barbara, she made the move to join them.

The year Francis and Schrumpf were born was a monumental one for the United States. It was the year the U.S. declared war on Germany and entered World War I. It was also the year Ella Fitzgerald and John F. Kennedy were born. Since then, Francis and Schrumpf have lived through some profound moments in our society, including two World Wars, women’s suffrage, and 25 presidential elections. 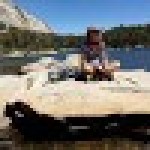