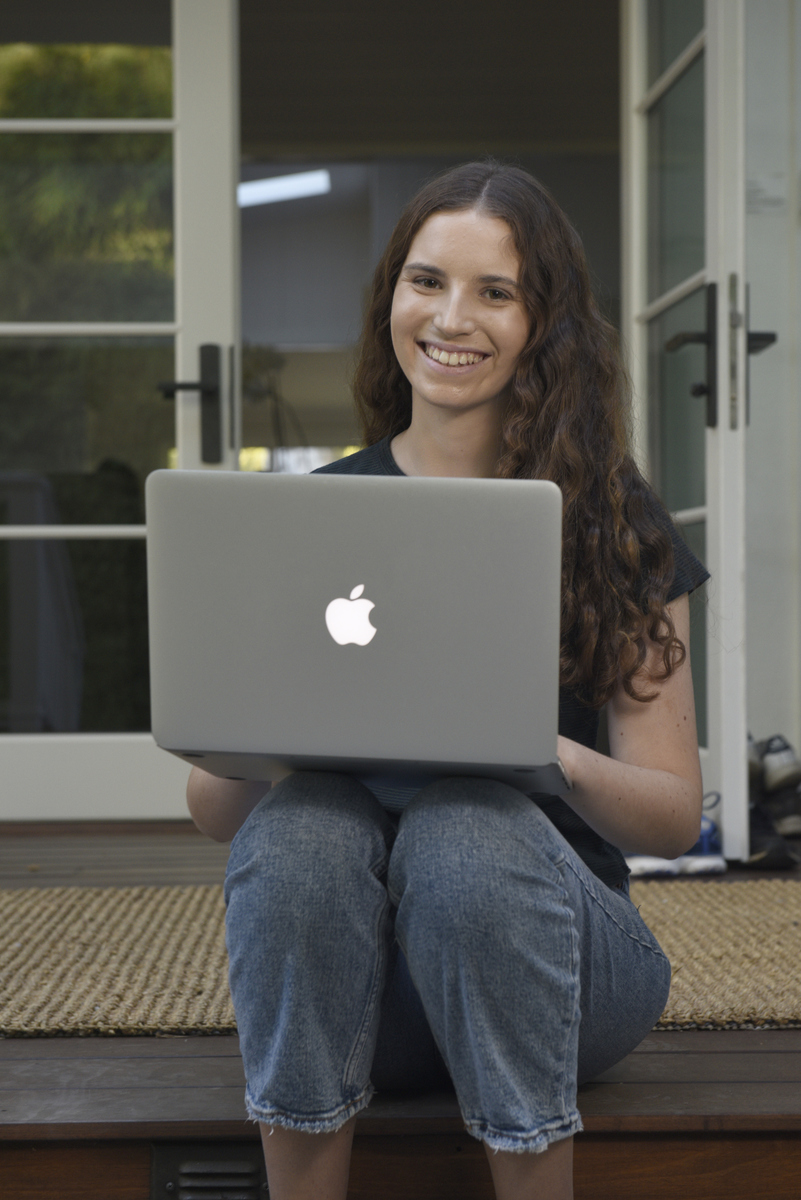 These days, teens are under such tremendous amounts of stress from school and other responsibilities that reports are calling it a psychological epidemic. For Santa Barbara High sophomore Olivia Seltzer, that stress can be compounded with even larger responsibility: She informs hundreds of thousands of her young peers about international news every day.

Seltzer is the 15-year-old founder and sole writer of The Cramm (thecramm.com), a curated news site that breaks down daily national and international happenings in a vernacular that speaks directly to its Gen Z readers. Despite the big job, Seltzer keeps a calm-yet-powerful demeanor. At first, she seems to be a quiet introvert, but it quickly becomes clear how careful and deliberate she is about her word choice.

“I write The Cramm exactly how I’d talk to my friends out loud,” Seltzer said. “It’s not necessarily about using slang words; it’s about presenting it through the lens and perspective of a young person.” Much of her approach, she said, is about defining unfamiliar terms and adding more context for young readers, but she never “dumbs it down.”

In 2016, she found that her conversations with then-Santa Barbara Junior High classmates became increasingly more focused around President Donald Trump’s election campaign. It was personal to them, as many of her Santa Barbara peers were Latino, some undocumented, and they feared the effect the presidency could have on their families after Trump pledged mass deportations throughout his campaign.

Seltzer’s paternal grandfather immigrated to the U.S. from Mexico City, which, along with the Ashkenazi Jewish heritage from the same side of the family, pushed her to get informed about the government leaders whose policies shape the lives of immigrants and other marginalized people. She felt the world needed more activists to protect the most vulnerable, but young people of her generation were not reading the news. How, she asked, can young people change the world if they don’t know what’s going on in it?

Thus, The Cramm was born.

“We have dinner as a family most nights and have always talked politics openly with the kids,” said Olivia’s mother, Dana Seltzer. “We don’t censor our conversations with the kids when it comes to that, and we treat them and speak to them like we would our adult friends.” The family includes Dana’s husband, Aaron, and Olivia’s younger brother, 12-year-old Oscar.

Dana, an interior designer, said her daughter has had a passion and thirst for knowledge long before The Cramm.

“Watching her become an older and more confident young woman has been amazing, because when she was younger she was so curious, but she was quiet and shy,” Dana said. “But despite her shyness, she has always been loud on paper.” She said her daughter played around with creating other websites in the past, but The Cramm is what stuck.

Seltzer wakes up at 5 a.m. every morning to pore over national and international news sources and write a curated, daily newsletter summing up the top international happenings before she goes off to school for the day. BBC News is her favorite source, she said, because “it is the least biased.”

“I have to do extra research every morning,” Seltzer said. “I almost always come across terms or references I haven’t heard of, so I look them up and define them for readers because if I don’t understand them, they probably won’t either. … My parents are asleep that early, so I don’t go and ask them. I just find a way to do more research.”

The Cramm has been a huge hit with Gen Zers — it currently has readers in 71 different countries, and she said her reader numbers are “in the hundreds of thousands and at least half are international.”

Although Seltzer is the sole writer, she formed a volunteer editorial team called the “Crammers” who live around the globe, here in Santa Barbara, in New York, and as far away as Fiji and France. The Crammers, who range in age from 13 to 18, help Seltzer by sending her research and interviews for the daily newsletter. She said they “keep an eye on the news” from their respective locations, and they communicate news ideas through a group chat on Instagram.

“The most special part is really how much readers want to get involved,” Seltzer said. “I get reader emails all the time asking to be a part of the Crammer team, and readers share how The Cramm has inspired them to be activists.” She said one reader started a student protest at her school to end gun violence after reading Seltzer’s newsletter about multiple mass shootings in American schools. “Those kinds of stories are what motivate me to keep getting up and writing The Cramm every day.”

In addition to her Crammer team, Seltzer also has an advisory board of “trusted adults” whom she checks in with for advice or help. The adults don’t have any control over what content Seltzer chooses to publish, but they function as a sounding board. It’s made up of educators and journalists, among others. Elise Simmons, principal of Santa Barbara High School, is on the advisory board.

“I write The Cramm exactly how I’d talk to my friends out loud.”

“In the sense of what she’s actually doing, Olivia is the kind of student you only meet once in your career,” Simmons said. “The more time I spend with students in recent years, I’ve found that many have a heart and mind like Olivia. They are very focused on changing the world, but the difference with Olivia is her actions. She is actually doing this, all on her own.”

Simmons said she first heard about The Cramm early last year from a friend, and she was immediately impressed and called Seltzer into her office to learn more. Simmons shared the news site with the rest of the Santa Barbara High staff and the district superintendent, and she said that now two teachers at the school use Seltzer’s website as part of their class curriculum. One teacher uses it for “current event reflections” in her English class, where she requires students to read The Cramm and then write a reflection about it.

“I literally start my day by reading The Cramm while waiting for my car to warm up,” Simmons said. “On the rare occasions that it isn’t posted yet, I immediately call to find out if Olivia is sick, and she almost always is.

“My favorite thing about her writing is that she has such a unique style that even I start to pick up on some of the language,” Simmons said, laughing. “I’ll catch myself saying something like ‘TBD’ [to be decided or discussed] in normal conversation as a full-grown woman.”

Seltzer said another goal of The Cramm, besides connecting with young readers, is to cover stories that traditional media tends to ignore or minimize. She said she looks up to Vice, a publication that is known for covering news events that other mainstream publications don’t. She cited the hundreds of wildfires that burned through Indonesia in mid-September as an example because they “were hardly recognized in the media,” which instead focused coverage on the Amazon fires happening around the same time.

‘In the sense of what she’s actually doing, Olivia is the kind of student you only meet once in your career.’

“I made the Indonesian fires the biggest story of that week,” Seltzer said. “I was like, ‘Why is this not the front page of every newspaper right now?’ The smog from the fires was so bad that it reached Singapore and Malaysia, hundreds of schools were shut down, but you had to really dig through mainstream media to find reports of it.”

Anyone who subscribes to Seltzer’s daily newsletter can receive it via email or through text message, which she claims is the only news aggregate to do so. The daily text is a huge key to success, she explained, because “kids don’t use email.” Young people text, and getting a daily summary of all the world news in a single text message is a convenience that Seltzer has proved will increase Gen Z’s engagement in current events.

Seltzer has a larger vision for The Cramm. She wants to start making videos and podcasts of the news because “my generation is more visual.” Once high school is over, she hopes to make a career out of her website with a full staff of paid journalists to cover events and report firsthand.

“Most people don’t realize that this is still a one-woman show,” Dana Seltzer said. “Olivia wants to make a career out of this, and I believe she will. People already are asking if they can have positions as volunteers.” And, of course, Seltzer’s plans go even bigger than The Cramm. She plans to go to college to become a human rights attorney, too.

But for now, Seltzer will finish her remaining 2.5 years of high school and try to lose some of the stress and enjoy teendom with her friends — so long as she is in bed early enough to get up for her 5 a.m. Cramm wakeup call.