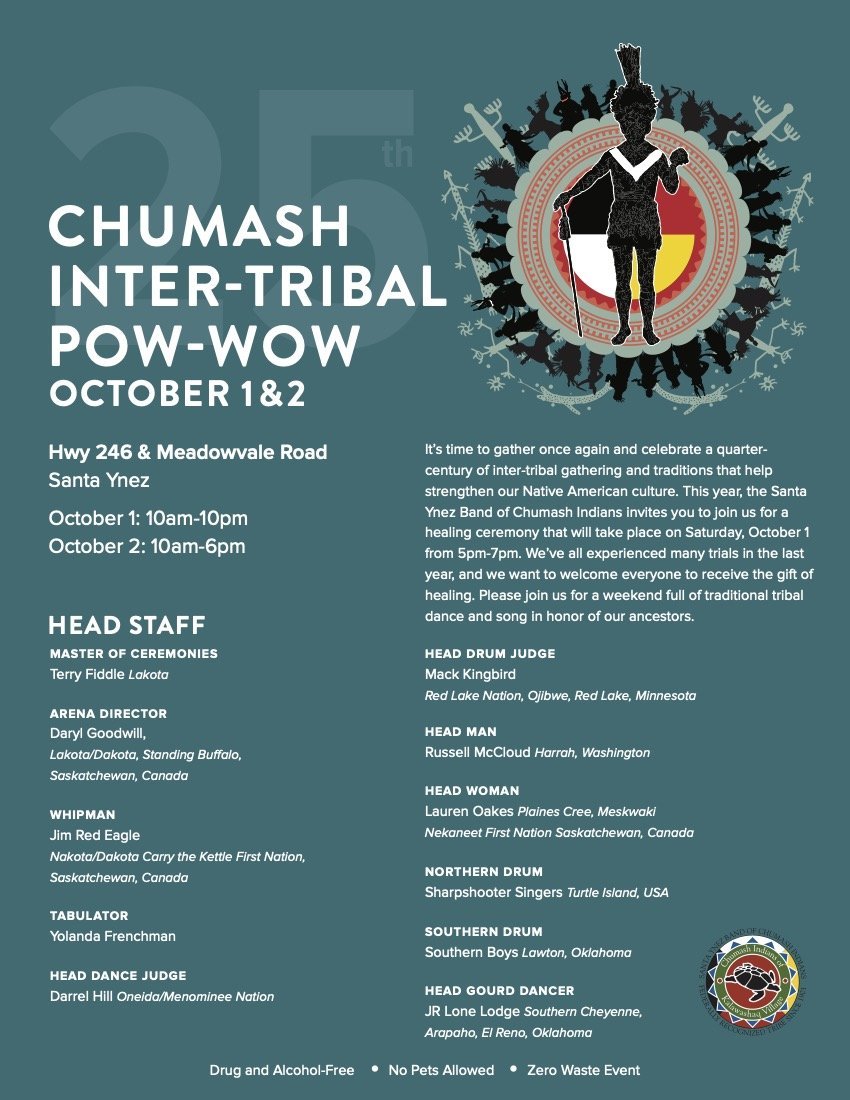 Add to Calendar Get Tickets - $5

TO BE HELD IN SANTA YNEZ

Dancing, singing and drumming will be on display as Native American tribes from throughout North America descend on Santa Ynez to celebrate their heritage during the 25th annual Chumash Intertribal Powwow. The two-day gathering is open to the public and will be held from 10 a.m. to 10 p.m. on Saturday, Oct. 1 and from 10 a.m. to 6 p.m. Sunday, Oct. 2 at the corner of Meadowvale Road and Highway 246 in Santa Ynez. Admission is $5 and parking is free.

A gourd dance at noon, followed by a grand entry at 1 p.m., will mark the start of the powwow each day, which is the Santa Ynez Band of Chumash Indians’ largest cultural event of the year.

This will be the first time the tribe has hosted the annual event in Santa Ynez since it was moved in the 1990s to Live Oak Camp in Santa Barbara. The powwow was canceled the past two years because of the pandemic.

“We are excited to bring the Chumash Intertribal Powwow back to Santa Ynez,” said Kenneth Kahn, Tribal Chairman for the Santa Ynez Band of Chumash Indians. “It’s always a special time when tribes are able to come together to celebrate heritage, and it’s a great opportunity to share our culture and traditions with the general public.”

The Chumash Intertribal Powwow draws hundreds of members of tribal nations from throughout North America to participate in dancing and drumming competitions. Dancing categories range in age from young children to 70 years and older. Dance styles include traditional, straight, fancy, grass, jingle dress, buckskin, cloth and chicken. More than $50,000 in total prize money will be offered. The event will also feature informational booths, Native American arts and crafts and food booths.

The powwow is an annual effort of a committee of Chumash tribal volunteers who plan, organize and operate the two-day event. The committee’s goal is to provide the community with educational and cultural experiences, focusing on Native American music, arts and customs while promoting Native American self-reliance and pride.

The Chumash Intertribal Powwow is a zero waste event. Guests are encouraged to bring their own reusable water bottles and support the event’s green vendors by disposing of trash and recyclables in the proper receptacle bins.

For more information on the powwow, call 805-688-7997 or visit santaynezchumash.org/powwow.

The Santa Ynez Indian Reservation is located in Santa Barbara County and was established and officially recognized by the federal government on December 27, 1901. Today, the Santa Ynez Band of Chumash Indians remains the only federally recognized Chumash tribe in the nation. The tribe is a self-governing sovereign nation and follows the laws set forth in its tribal constitution.