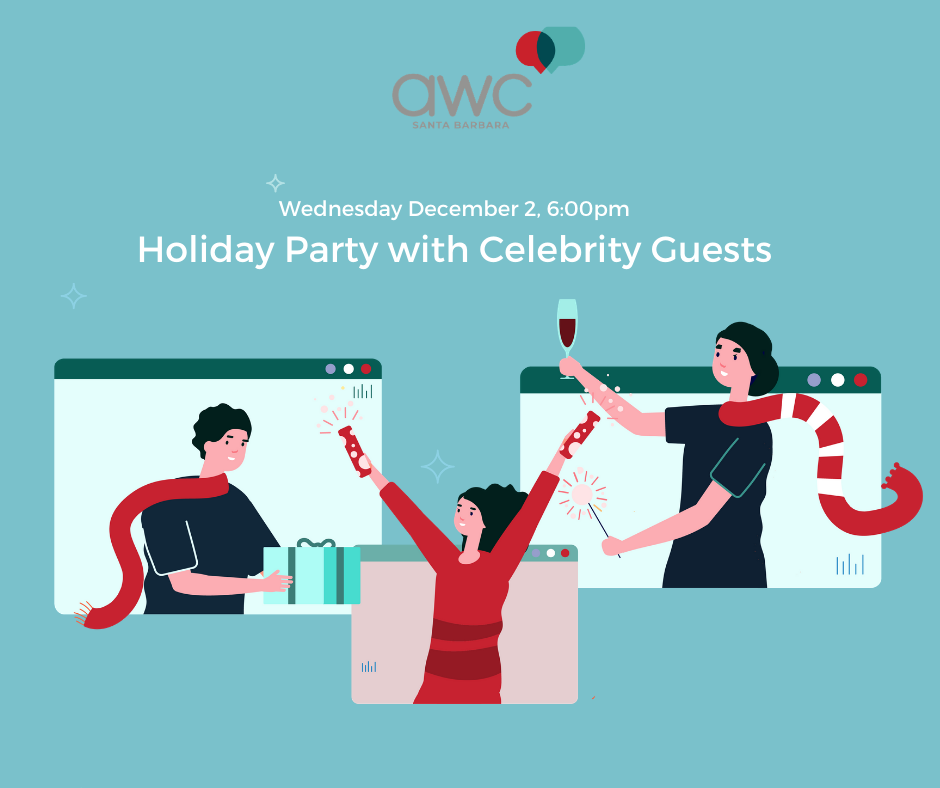 Add to Calendar Get Tickets - Free-$10

The Santa Barbara chapter of the Association for Women in Communications invites the community to raise a glass and exhale at their annual holiday party whenthey will gather to enjoy good company and celebrate the accomplishments of some exceptional local communicators. A beloved AWC-SB tradition, the Holiday party will be a Zoom event this year and organizers are  planning activities, games, and surprises to make it extra special on Zoom.

·       A Fireside Chat with Marianne Partridge, Editor-in-Chief, and Brandi Rivera, Publisher, of the Santa Barbara Independent, two of the most Powerful Women in Media on the Central Coast

·       Virtual Mingling in Break Out Groups

The party is free to AWC-SB members, $10 for guests. Participants are invited to treat themselves to festive refreshments from Uncorked Wine Bar & Kitchen which will offer AWC-SB members a dinner & wine takeout at a special price.

Zoom link will be sent to registrants on Monday, November 30th.

Marianne Partridge is the editor-in-chief and co-founder of The Santa Barbara Independent, which published its first issue on Thanksgiving Day in 1986. Before moving to Santa Barbara in 1980, Marianne was the editor of the Village Voice, executive editor of Look Magazine, and senior editor of Rolling Stone magazine, where she also served as bureau chief in New York and Los Angeles. She began her career as a secretary at the original Saturday Evening Post, later working there as fiction reader and on the copy desk. She was a reporter in the Los Angeles bureaus of Forbes Magazine and The New York Times in the early ’70s and a contributing editor to New West magazine in the early ’80s.  Marianne has been married for over 40 years to Santa Barbara cattle rancher Jim Poett, with whom she has raised their two children, and many dogs, cats, and horses.

Brandi Rivera started working at the Santa Barbara Independent in 2008 and has served as the company’s CFO, Business Manager, and in August 2017 became the Independent’s first female Publisher. Recognized nationally in 2016 as one of Editor & Publisher magazine’s “Top 25 Under 35,” Brandi is a Santa Barbara “local” by was of UCSB, where she earned both her Bachelors Degree and Human Resource Management certification. She completed her MBA from Pepperdine University in December of 2017. Brandi says she appreciates how involved the Independent is in the community, and that the staff is like a giant family to her. She feels it is her duty to preserve the role of the Independent in the Santa Barbara community for years to come. In her spare time, Brandi enjoys reading, running, rooting for her favorite sports teams, and exploring with her husband and their two and a half-year-old son, Elijah.

Monica Kunz has served on the AWC-SB board of directors for four years, as marketing and design chair. For the Women of Achievement Awards, Monica designs the print program and many of the ads inside the program. She is also the designer of AWC-SB’s print ads that appear in the Santa Barbara Independent. “Monica’s graphics have polished our image as a group of-and-for professionals. She often encourages us to be more bold,” said AWC-SB Membership Chair Carolyn Jabs.

Beth Pitton-August is the 2020 recipient of the Lois Phillips Founder’s Award, presented annually to an outstanding communicator who champions opportunities for women.

Beth has had a strong interest in women’s political power. Her latest project is the documentary film, Just the Beginning: A Century of Women’s Political Power©, which is co-sponsored by the League of Women Voters. The film chronicles the 100 years of political power that began when women won the right to vote in the United States. The film makes it clear that, as Beth puts it, “When women have a seat at the table, they make a difference.” The film has been a labor of love because Beth believes that using media to communicate big ideas is critical to changing minds and hearts. Click here to watch the movie’s promotional trailer.

Beth earned a Master of Arts degree from De Paul University where she studied Philosophy and Feminist Studies. She has worked as a development and fundraising specialist primarily in the nonprofit sector for stellar agencies such as the Environmental Defense Center and Direct Relief. For the past four years, Beth has been Director of Development for the Bren School of Environmental Science & Management at UC Santa Barbara.