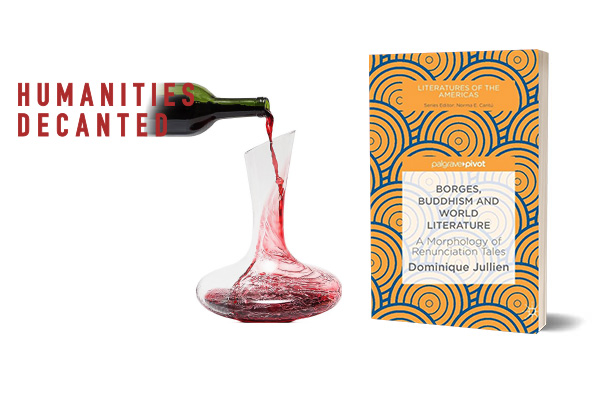 Join us for a dialogue between Dominique Jullien (French and Comparative Literature) and Sowon Park (English) about Jullien’s new book, Borges, Buddhism and World Literature: A Morphology of Renunciation Tales. Refreshments will be served.

Jullien’s latest book follows the renunciation story in Borges and beyond, arguing for its centrality as a Borgesian compositional trope and as a Borgesian prism for reading a global constellation of texts. The renunciation story at the heart of Buddhism, that of a king who leaves his palace to become an ascetic, fascinated Borges because of its cross-cultural adaptability and metamorphic nature, and because it resonated so powerfully across philosophy, politics and aesthetics. From the story and its many variants, Borges’s essays formulated a ‘morphological’ conception of literature (borrowing the idea from Goethe), whereby a potentially infinite number of stories were generated by transformation of a finite number of ‘archetypes’. The king-and-ascetic encounter also tells a powerful political story, setting up a confrontation between power and authority; Borges’s own political predicament is explored against the rich background of truth-telling renouncers. In its poetic variant, the renunciation archetype morphs into stories about art and artists, with renunciation a key requirement of the creative process: the discussion weaves in and out of Borges to highlight modern writers’ debt to asceticism. Ultimately, the enigmatic appeal of the renunciation story aligns it with the open-endedness of modern parables.