BREAKING: Lake Cachuma Spills for First Time in over a Decade 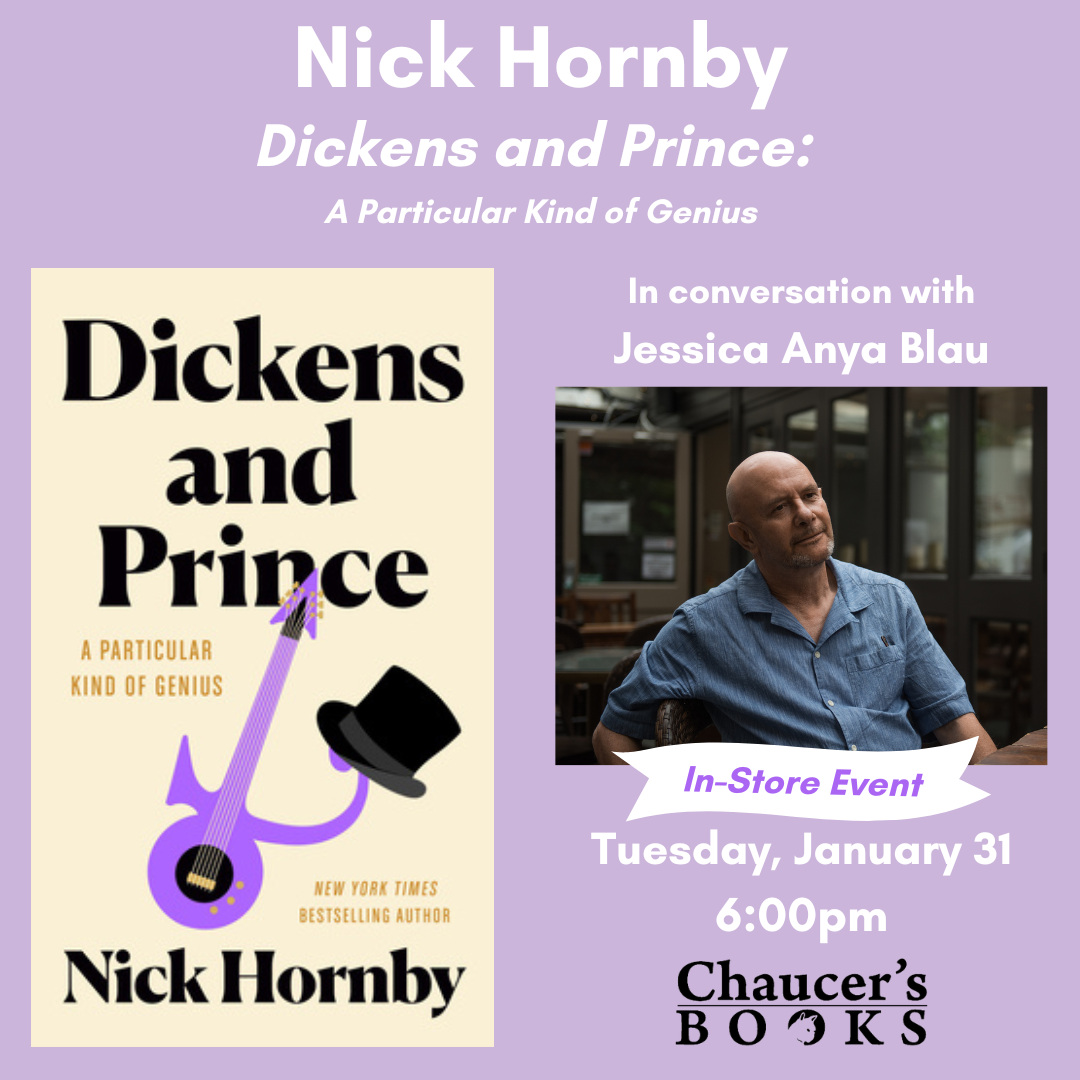 Chaucer’s will host author Nick Hornby for a conversation with writer Jessica Anya Blau on Tuesday, January 31 at 6 p.m.

“An ardent fan letter from Hornby that makes you want to re-read Great Expectations while listening to Sign o’ the Times.” —Vogue

From the bestselling author of Just Like You, High Fidelity, and Fever Pitch, a short, warm, and entertaining book about art, creativity, and the unlikely similarities between Victorian novelist Charles Dickens and modern American rock star Prince

Every so often, a pairing comes along that seems completely unlikely—until it’s not. Peanut butter and jelly, Dennis Rodman and Kim Jong Un, ducks and puppies, and now: Dickens and Prince.

Equipped with a fan’s admiration and his trademark humor and wit, Nick Hornby invites us into his latest obsession: the cosmic link between two unlikely artists, geniuses in their own rights, spanning race, class, and centuries—each of whom electrified their different disciplines and whose legacy resounded far beyond their own time.

When Prince’s 1987 record Sign o’ the Times was rereleased in 2020, the iconic album now came with dozens of songs that weren’t on the original— Prince was endlessly prolific, recording 102 songs in 1986 alone. In awe, Hornby began to wonder, Who else ever produced this much? Who else ever worked that way? He soon found his answer in Victorian novelist and social critic Charles Dickens, who died more than a hundred years before Prince began making music.

Examining the two artists’ personal tragedies, social statuses, boundless productivity, and other parallels, both humorous and haunting, Hornby shows how these two unlikely men from different centuries “lit up the world.” In the process, he creates a lively, stimulating rumination on the creativity, flamboyance, discipline, and soul it takes to produce great art.

Nick Hornby is the author of seven bestselling novels, including High Fidelity, About a Boy, and A Long Way Down, as well as several works of nonfiction. Many of his books have been turned into successful films and TV series. He has been Oscar nominated twice, for his screenplays of An Education and Brooklyn. His ten-part short-form TV series State of the Union, directed by Stephen Frears, was recently broadcast by Sundance TV and the BBC and won three Emmy Awards. He lives in London.

Jessica Anya Blau was born in Boston and raised in Southern California. Her novels have been featured on The Today Show, CNN and NPR, and in Cosmo, Vanity Fair, Bust, Time Out, Oprah Summer Reads and other national publications. Jessica’s short stories and essays have been published in numerous magazines, journals and anthologies. Jessica co-wrote the script for Love on the Run starring Frances Fisher and Steve Howey. She sometimes works as a ghost writer and has taught writing at Johns Hopkins University, Goucher College and The Fashion Institute of Technology. Jessica lives in New York.

Praise for Dickens and Prince:

“Smart, witty and weirdly convincing… Pop culture is political to Hornby. Beneath this latest book’s stocking-filler-light surface, you can sense a subtle sort of crusade. By pairing these two artists, he’s making a couple of implicit assertions — that Prince is as important as Dickens and that Dickens is as fun as Prince.” —The Times (London)

“His book is both a love letter to two artists who have nourished him and the story of how they ‘caught fire and lit up the world.'” —The Guardian

“If you’ve forgotten what a distinct pleasure it is to read Nick Hornby, may I suggest Dickens and Prince.”—San Francisco Chronicle

“I love this. It’s smart and funny and elegantly persuasive.” —Robert Douglas-Fairhurst, author of Becoming Dickens

“Hornby’s admiration for his subjects is infectious… a zesty tribute to two cultural legends not often spoken about in the same breath.” —Publishers Weekly

“Hornby is a writer who dares to be witty, intelligent, and emotionally generous all at once.” —The New York Times

“The clever British storyteller …[has] excellent taste and a smart, irreverent sense of humor.” —The Boston Globe

Dickens and Prince: A Particular Kind of Genius (Hardcover)