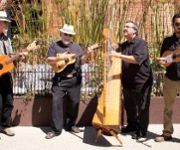 AN EVENING WITH JOHN ROBLES AND CHUCUMITE John Robles, Robert Perales, Sean Hutchinson and David Salais form the group Chucumite. John plays the arpa jarocha, or Veracruz folk harp, and Robert plays an eight-string rhythm guitar called the jarana jarocha.Robles and Perales have been playing together for over 20 years, and have played up and down the Pacific Coast as well as at music festivals in Mexico. Sean joined the group in 2009 and was an accomplished bass player in several rock bands, and when he was introduced to son jarocho, he fell in love with it. He had a natural affinity for the instrument called the leona, a large four stringed instrument played with a heavy pick made traditionally of cow horn. David Salais plays the requinto jarocho, a smaller four stringed instrument which, like the harp, carries a melodic line. Not only is Salais a musician, he is a luthier who makes jarocho instruments, a couple of which will be played during the concert. Chucumite specializes in son jarocho (son means sound and jarocho is a colloquialism applied to the people of Veracruz), a folk music genre from Veracruz, Mexico, with a long history dating back to the Conquest.. When the Spanish conquistadores came to the New World in 1519, they entered by way of what became the port of Veracruz, or as it was christened by them, La Villa Rica de la Vera Cruz, or the Rich Village of the True Cross. They brought musical instruments with them, including the baroque harp, the baroque guitar, and other instruments. The indigenous people gradually created their own music form from three roots, the music of Baroque Europe; musical and vocal elements of African music, brought to the New World by slaves from West Africa; and the indigenous rhythms that existed in Mexico at the time.