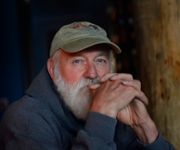 Returning to his roots, renowned photojournalist David LaBelle will appear in Ventura on Saturday, March 23, to commemorate two intersecting golden anniversaries and introduce his new book chronicling them. LaBelle will speak at 3 p.m. at the Museum of Ventura County, in the Martin V. and Martha K. Smith Pavilion. Admission is free for members of the Museum, $5 for nonmembers. During his appearance, LaBelle will observe the 50th anniversary of his prolific photojournalism career, which began in 1969 with the publication of his photographs in his hometown Ventura Star-Free Press; he also will observe 50 years since the catastrophic Ventura/Santa Clara watershed flood in which 13 people were lost including his mother. The flood is at the heart of Bridges and Angels: The Story of Ruth, the newly published novel LaBelle penned and will make available at the museum event, kicking off a national and international book tour. I figured, what better way to introduce the book than by unveiling it in Ventura County, where it all began? LaBelle said. A life in photos LaBelle was 17 years old on Jan. 25, 1969, when the deadly flood took his mother and reset the course of his life. After graduating later that year from Ventura High School, he set his sights on chronicling the world around him in photographs. The next year, at age 19, he became the youngest person ever to win a regional Photographer of the Year Award from the National Press Photographers Association. After starting his photojournalism career at his hometown Star-Free Press, LaBelle went on to work as a photographer at newspapers across California as well as in Alaska and Kansas before becoming a photo director in 1981, at the Ogden (Utah) Standard-Examiner; over the years, LaBelle managed a number of newspaper photo departments across the country, including at the Ventura County Star, where from 1998 to 2001 he was assistant managing editor and director of photography. LaBelle also has made a name for himself in academia, including as a longtime photojournalist in residence at Western Kentucky University. In addition, throughout his career, hes been a regular guest lecturer at universities and other institutions across America and Canada, around the world from Norway to Singapore. And hes had his work published, in five photography-related books as well as in numerous magazines including Sports Illustrated, People and National Geographic World. Currently LaBelle and his wife, photographer Erin Moroney, live in Athens, Ohio, where LaBelle is classroom instructor of photography for the Athens Photo Project, a mental health recovery program, and Moroney is a photo instructor and health and wellness coordinator. LaBelle and Moroney have two grown sons, Tucker and Henry.