Add to Calendar Get Tickets - Donation 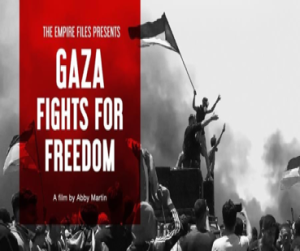 Join Students for Justice in Palestine, Jewish Voice for Peace-Santa Barbara, the Student Activist Network, and the SB Anti-War Collective for the premiere of the much anticipated documentary, Gaza Fights for Freedom.

Filmed in 2018 during the Great March of Return, this documentary also includes rare footage of the 1948 Nakba (Catastrophe in Arabic), the brutal ethnic cleansing of indigenous Palestinians from their ancestral lands. It offers a recent glimpse into the ongoing struggle of the Palestinian people to survive Israeli occupation.

The film will be followed by a discussion with filmmaker and noted journalist Abby Martin.