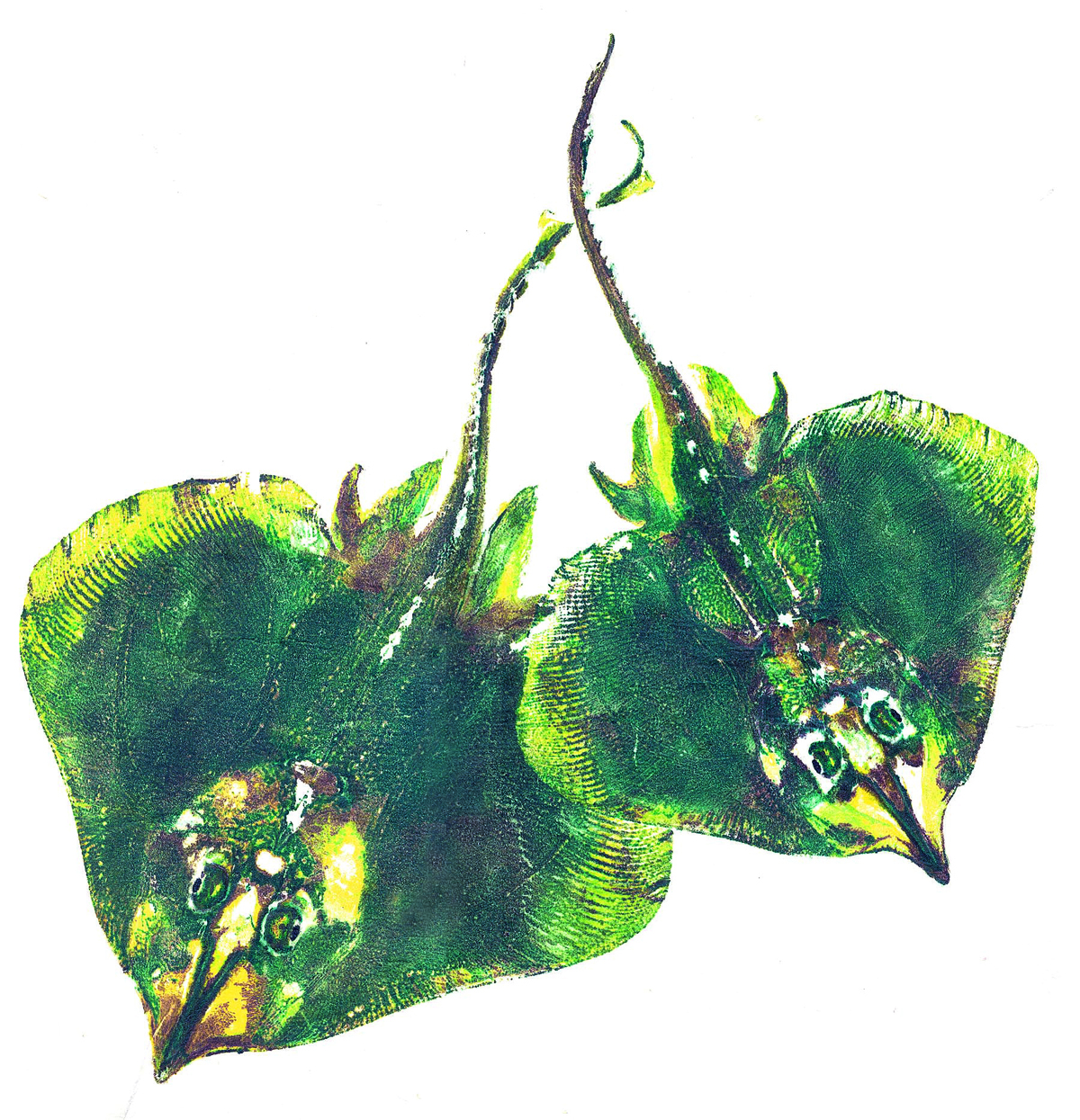 The objective of nature printing is to express the essence of nature through the medium of paper or cloth and ink. The simple elegance of common subjects is preferred. Whether leaf, shell, crab or fish, each plant or animal has its own unique texture, shape, and energy. By isolating the subject in the negative space on a sheet of paper this signature can be identified. The results are Zen-like renderings that praise the diversity and beauty of nature. Gyotaku is a traditional Japanese method of nature printing that uses fishes, sea creatures, or similar subjects as ‘printing plates’ in its process. Dating back to the mid-1800s, it was used by fishermen in Japan to record their catches, and it is still utilized today. There are various approaches to nature printing. The direct method of nature printing involves applying ink directly to the surface of the fish or other subject to be printed. Paper is then placed over the inked subject and rubbed by hand to transfer the ink to the paper and create the artwork. This hands-on method to transfer the ink allows the artist to feel not only the shape but the texture of the fish. In the indirect method, ink is dabbed onto the surface of thin damp paper molded over the surface of the fish or other subject. In both methods, eyes—and sometimes fine details—are painted in later.

Eric Hochberg, who received a Ph.D. in Biology at UCSB in 1971, is a Curator Emeritus in the Department of Invertebrate Zoology at the Santa Barbara Museum of Natural History and is one of the leading nature printers in the United States. He has been active in printing since 1968 and has studied and collaborated with printmakers throughout the world. Hochberg became interested in printing nature about 50 years ago because it provided a nice balance to the scientific research he was doing as Curator at the Natural History Museum. In 1976, he was instrumental in co-founding the international-based Nature Printing Society, an international organization devoted to the preservation of nature and the unique art of nature printing. Over the years, Hochberg has hosted several NPS annual meetings in Santa Barbara over the years, taught numerous printing workshops, and given lectures both in Santa Barbara and around the world. He organized and guest curated the first group exhibition of nature prints by American, European and Japanese artists for the National Museum of Natural History at the Smithsonian Institution. The exhibition, Pressed on Paper, opened in 1981 and toured for 6 years throughout North America and Australia through the auspices of the Smithsonian. His work has been included in numerous solo and group exhibitions and is represented in private, corporate, and museum collections in North America, Europe, Australia, and Japan. For over 40 years, Eric has lectured extensively on the history and techniques of nature printing, and has taught numerous workshops throughout the world.

Dwight Hwang began fishing solo at 13 and gravitated toward the tebo style, a challenging type of fishing done with no reel and an ultra-sensitive float. His first exposure to Japanese gyotaku occurred in 2008 at a tackle shop in Tokyo where the walls had been covered with fish prints. Hwang was immediately captivated. The inability to find a master under whom to study led him to experiment with fish, calligraphy paper, and bottled sumi ink in his free time. The realization that a fish was not only the subject, but the tool by which art is created, led him to more adeptly manipulate the fish into naturalistic positions. This, combined with the natural softness of sumi ink and his ability to convey perspective, adds lifelike energy and vitality to the final images. Dwight prides himself as a traditionalist: he only works with sumi inks and handmade papers. His work has been shown in the United States, France, and Monaco, and he has had his work published in several books including Yvon Chouinard’s Simple Fly Fishing: Techniques for Tenkara and Rod and Reel. His first major solo exhibition, Impressions of the Sea: Gyotaku Fish Prints, was held at the Japan Foundation, Los Angeles. He is currently working on projects with the National Oceanic and Atmospheric Administration (NOAA) and the outdoor lifestyle brand, Patagonia.