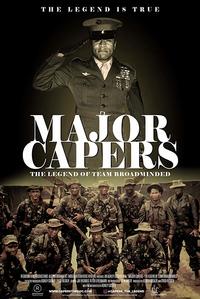 “Major Capers: The Legend of Team Broadminded”, is an honest and unflinching documentary that portrays the extraordinary true-life story of Major James Capers, Jr., an American hero, who persevered through adversity during a time of civil unrest. After 50 classified/top-secret missions and being wounded 19 times, Capers rose to become one of the most decorated Force Recon Marines in history. Capers and his Force Recon team, aptly named “Team Broadminded” overcame stereotypes and seemingly impossible missions. Capers’ story begins childhood, as the son of a sharecropper, through his service as a Force Recon Marine in Vietnam to covert operations in Africa and Eastern Europe. The documentary features raw and honest audio recordings made by Capers in the battlefield, including recently declassified film and photographs that transport the viewer deep into the heart of a faithful warrior, through once-classified or top-secret missions.

The film will be followed by a Q&A with Major James Capers, Jr.