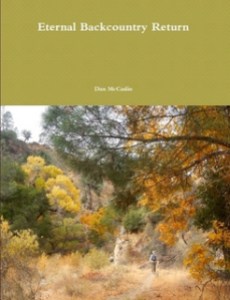 Calling all our hikers, bikers, naturalists and adventurists! Chaucer’s Books is excited to host, backcountry expert, as he launches and signs his new book entitled Eternal Backcountry Return.

Backcountry hiking adventures in eastern Santa Barbara County mirror the early Anthropocene wanderings all of us perforce must follow in the 21st century. Scrambling with a young boy on the wild and scenic Sisquoc River, getting lost on “the 40-Mile Wall,” seeking solace from the Red Shaman pictograph, following the tragic arc of the Hale Bopp comet and the Heaven’s Gate suicides, running out of water at sweet Madulce Camp only to be saved by the Mother… The San Rafael Wilderness east of Santa Barbara remains some of the wildest country in the American West, replete with condors and centipedes, pictographs and petroglyphs, rock wonders and cranky reprobates like the writer and his posse of hikers, The Rattlesnake Canyon Boys.

Dan McCaslin has been hiking the Santa Barbara backcountry since the early 1970s, and while teaching Crane school, he led many student backpacking trips to the southern high Sierra Nevada and several other wilderness spots. He has written 135 hiking columns for Santa Barbara Noozhawk and (earlier) Santa Barbara Independent covering scores of hikes and backpacks he has made over the last eight years.

McCaslin earned a PhD in ancient history at UCSB in 1979, and is the author of a marine archaeology monograph about the Bronze Age eastern Mediterranean entitled Stone Anchors in Antiquity. He serves as an archaeological site monitor for the US Forest Service via the volunteer Partners in Preservation field group, and is currently in charge of protecting rock art sites along the length of the Sisquoc River. McCaslin has also written   The Three Worlds of Crane School (2019) as well as the forthcoming Autobiography in the Anthropocene, a backcountry hiking sequel to Eternal Backcountry Return.