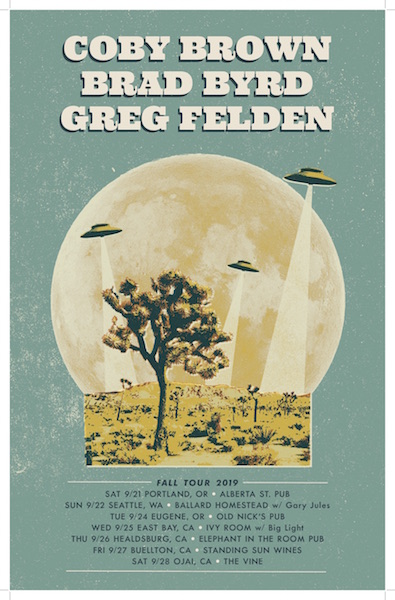 Three great songwriters are hitting the road in support of 3 separate brand new critically acclaimed projects.  Greg Felden, Coby Brown and Brad Byrd are touring in a very unique way. They’ll be sharing an impressive backing band and giving the audience three shows in one.

Greg Felden isn’t trying to hide, and he isn’t pulling any punches. His songwriting has been consistently praised for its honesty, intelligence, and emotional gravity. Made of Strings is a dynamic, impassioned collection of tunes that reflect the country and folk he was weaned on and the indie songwriters of the Pacific Northwest where he grew up. Now based in Los Angeles, he’s a staple of the Americana scene, earning respect and fans with his finely-crafted songs and captivating delivery. Greg is heard regularly on KCSN and KPFK.

Over the course of his career, Brad Byrd has written songs that firmly occupy the rarely-explored middle ground between indie rock and alt-country. He’s a genre-spanning musician, carving out a diverse sound fueled by melody, detailed storytelling, and the instincts of a journeyman songwriter who began making Americana music long before the genre had a name. He’s shared the stage with a variety of musicians, such as Jay Farrar, Mike Doughty, They Might Be Giants, Everlast, Lee DeWyze, and Family of the Year.