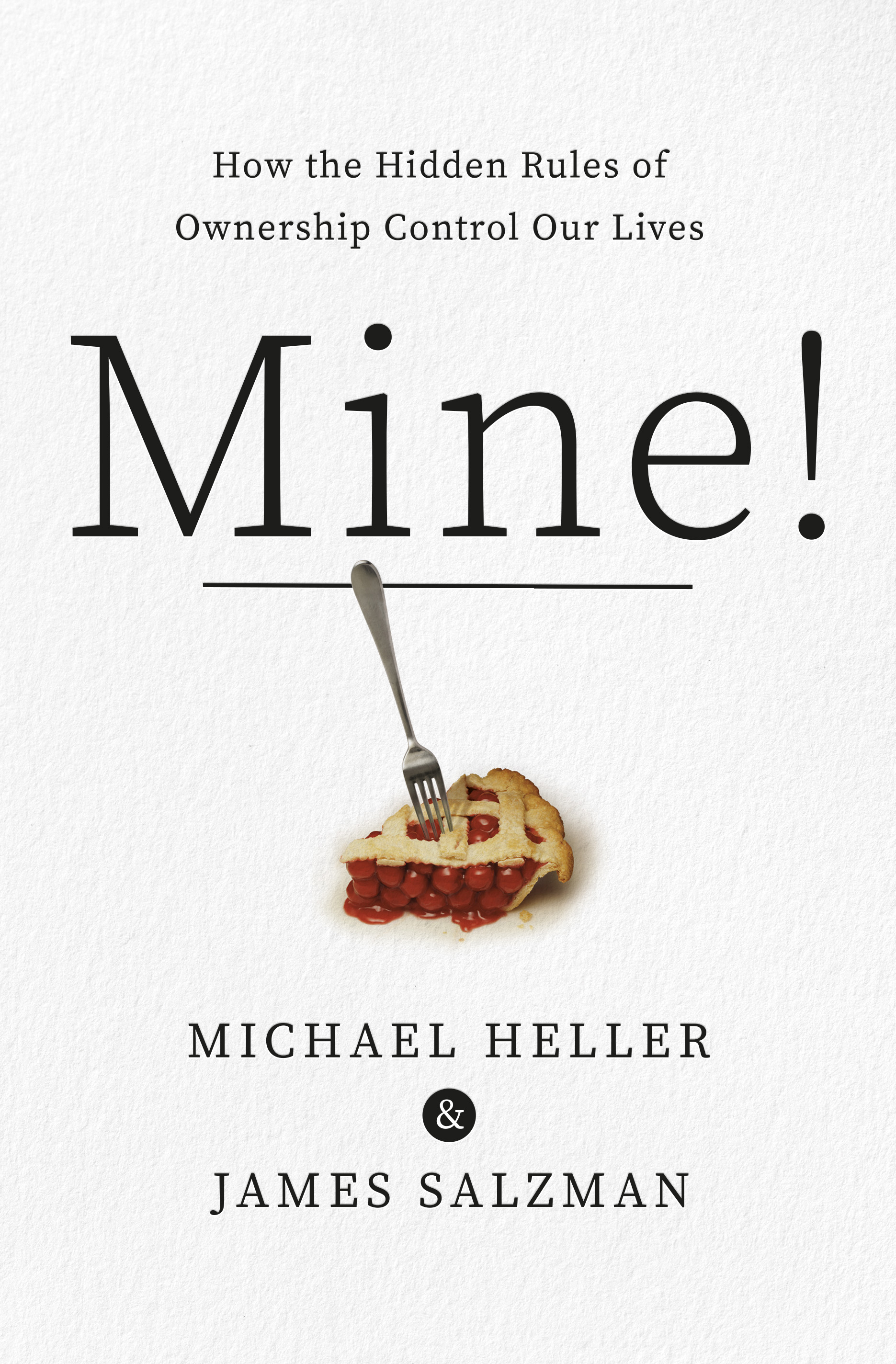 Please join us for an enlightening Chaucer’s Books  Virtual Author Discussion with James Salzman, the  co-author of MINE: HOW THE HIDDEN RULES OF OWNERSHIP CONTROL OUR LIVES on Wednesday April 14 at 6pm  James will be joined by Wendy Read in this discussion.

“Mine” is one of the first words babies learn. By the time we grow up, the idea of ownership seems natural, whether we are buying a cup of coffee or a house. But who controls the space behind your airplane seat: you reclining or the squished laptop user behind you? Why does HBO look the other way when you illegally borrow a password to stream their shows? And after a snowstorm, why does a chair in the street hold your parking space in Chicago, but in New York you lose the space and the chair?

Mine! explains these puzzles and many more. Remarkably, there are just six simple rules that everyone uses to claim everything. Owners choose the rule that steers us to do what they want. But we can pick a different rule. This is true not just for airplane seats, but also for battles over digital privacy, climate change, and wealth inequality. As Michael Heller and James Salzman show – in the spirited style of Freakonomics and Nudge – ownership is always up for grabs.

James Salzman is one of the world’s leading experts on environmental protection, counseling governments from Australia, Canada and England to India, Uruguay and China. Twice voted Professor of the Year, he has given numerous university lectures, keynote speeches, and media interviews tied to the publications of his books. Salzman frequently comments in the media on environmental topics and has lectured on every continent (including Antarctica).

In twelve books and over 100 articles and book chapters, Salzman’s scholarship has addressed topics spanning drinking water, trade and environment conflicts, policy instrument design, and creating markets for ecosystem services. Salzman’s popular book, Drinking Water: A History, was featured in the New York Times, Nature, and Scientific American. He co-authored the world’s most widely used international environmental law casebook. His articles have been downloaded over 100,000 times. For a summary of academic papers, see his UCLA Law School web page.

Salzman is the Donald Bren Distinguished Professor of Environmental Law with joint appointments at the UCLA School of Law and the UCSB School of Environment. He has taught at Columbia, Duke Harvard, Stanford, and Yale law schools and in Australia, China, Israel, Italy, Portugal, and Sweden. Before entering academia, he worked in Paris in the Environment Directorate of the OECD. Honors include election as a Fellow of the Royal Geographical Society, McMaster Fellow and Fulbright Senior Scholar in Australia, Gilbert White Fellow at Resources for the Future, and Bellagio Fellow at the Rockefeller Foundation. An honors graduate of Yale College and Harvard University, Salzman was the first Harvard graduate to earn joint degrees in law and engineering. He lives in Santa Barbara, California.

Michael Heller is one of the world’s leading authorities on ownership. His writings range over innovation and entrepreneurship, corporate governance, biomedical research policy, real estate development, African-American and Native American land ownership, and post-socialist economic transition. In each area, his work helps people see and cure ownership dilemmas no one had previously noticed. Heller has been voted Professor of the Year by his students. He has keynoted international conferences around the world and given over a hundred invited talks to a range of legal, business, economics, technology, international, and public policy audiences.

His influential and widely reviewed book, The Gridlock Economy: How Too Much Ownership Wrecks Markets, Stops Innovation, and Costs Lives reveals an ownership paradox that Heller discovered: creating too many property rights can be as costly as creating too few. Along with Gridlock Economy, he has published several noted academic books and dozens of articles in the leading legal journals and in Science. For a summary of academic papers, see his Columbia Law School web page; for works in progress, see his ssrn.com page.

Heller is the Lawrence A. Wien Professor of Real Estate Law at Columbia Law School where he has served as Vice Dean for Intellectual Life. Heller has taught at the NYU, UCLA, University of Michigan, and Yale Law Schools. He was a fellow at the Center for Advanced Study in the Behavioral Sciences and a term member of the Council on Foreign Relations. From 1990 to 1994, he worked at the World Bank on post-socialist legal transition. An honors graduate of Harvard College and Stanford Law School, he lives in New York.