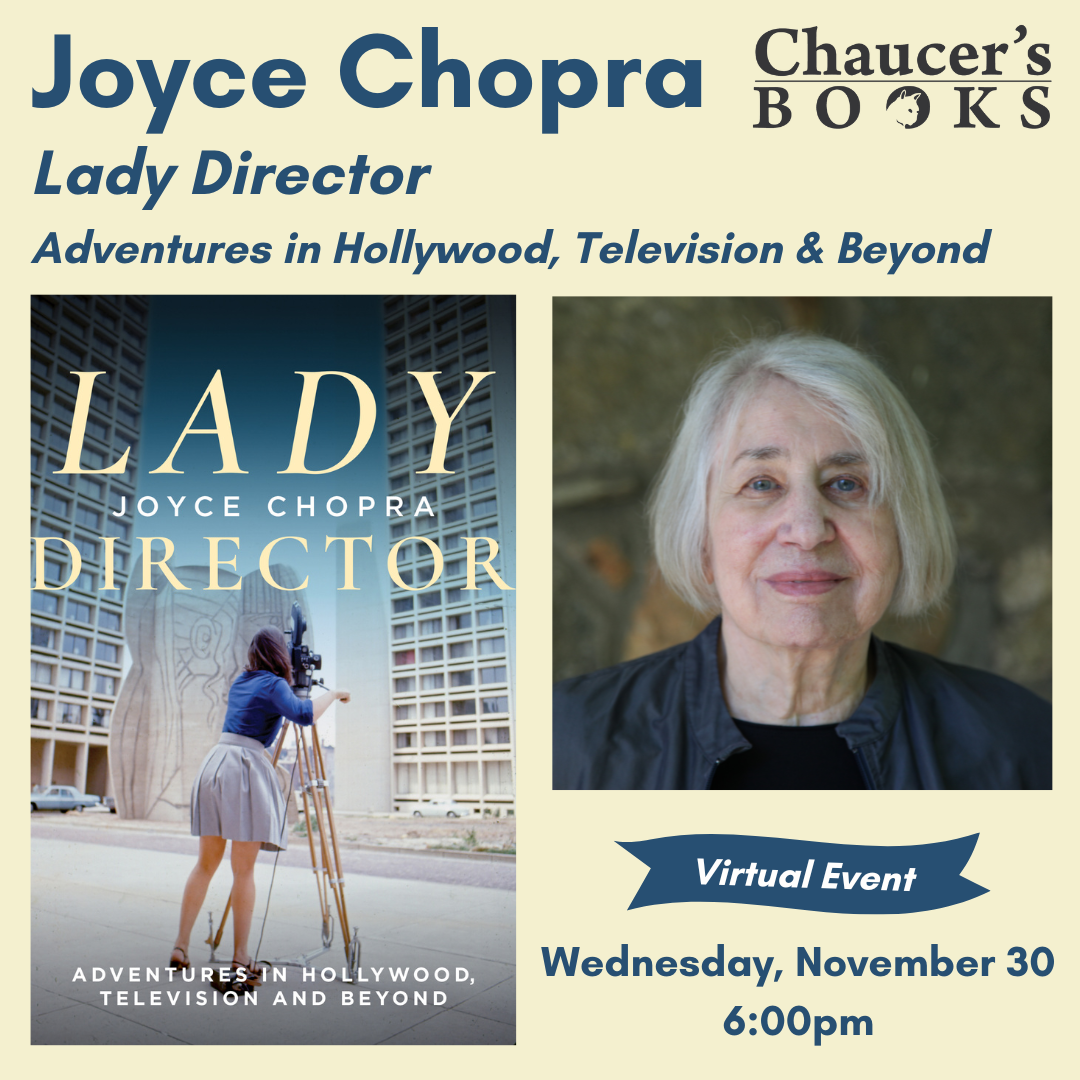 An intimate account of a seminal filmmaker’s development–as a creator and as a woman–both in art and in life.
“Joyce Chopra, what a gift of an extraordinary filmmaker you are, and one of our great pioneers who forged a very difficult path. And for female filmmakers everywhere, we are so blessed to have you as a storyteller to forge the way to make it easier for others.”–Laura Dern, actor
Hailed by the New Yorker as “a crucial forebear of generations,” award-winning director Joyce Chopra came of age in the 1950s, prior to the dawn of feminism, and long before the #MeToo movement. As a young woman, it seemed impossible that she might one day realize her dream of becoming a film director–she couldn’t name a single woman in that role. But with her desire fueled by a stay in Paris during the heady beginnings of the French New Wave, she was determined to find a way.
Chopra got her start making documentary films with the legendary D.A. Pennebaker. From her ground-breaking autobiographical short, Joyce at 34 (which was acquired for NY MoMA’S permanent collection), to her rousingly successful first feature, Smooth Talk (winner of the Best Director and Grand Jury Prize at Sundance in 1985), to a series of increasingly cruel moves by Hollywood producers unwilling to accept a woman in the director’s role, Chopra’s career trajectory was never easy or straightforward.
In this engaging, candid memoir, Chopra describes how she learned to navigate the deeply embedded sexism of the film industry, helping to pave the way for a generation of women filmmakers who would come after her. She shares stories of her bruising encounters with Harvey Weinstein and Sydney Pollack, her experience directing Diane Keaton, Treat Williams, and a host of other actors, as well as her deep friendships with Gene Wilder, Arthur Miller, and Laura Dern.
Along with the successes and failures of her career, she provides an intimate view of a woman’s struggle to balance the responsibilities and rewards of motherhood and marriage with a steadfast commitment to personal creative achievement. During a career spanning six decades, Joyce Chopra has worked through monumental shifts in her craft and in the culture at large, and the span of her life story offers a view into the implacable momentum of the push for all womens’ liberation.
“Joyce Chopra has written a devastatingly frank, candid, and unsparing memoir of her life as a film director–a ‘woman director’ in a field notoriously dominated by men. The reader is astonished on her behalf, at times infuriated, moved to laughter, and then to tears. Lady Director: Adventures in Hollywood, Television, and Beyond is one of its kind–highly recommended.” —Joyce Carol Oates, author of “Where Are You Going, Where Have You Been?”

Joyce Chopra has produced and directed a wide range of award-winning films, ranging from Smooth Talk, winner of the Grand Jury Prize for Best Dramatic Feature at the Sundance Film Festival, to the A&E thriller The Lady in Question with Gene Wilder. She has received American Film Festival Blue Ribbon and Cine Golden Eagle Awards for her numerous documentaries, including That Our Children Will Not Die, about primary health care in Nigeria, and the autobiographical Joyce at 34, which is in the permanent collection of the Museum of Modern Art. She lives in Charlottesville, VA.
Previous Event Next Event