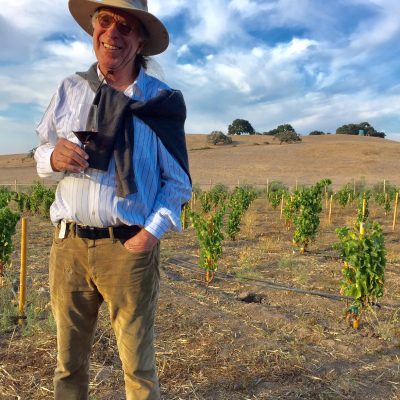 21 and over Best Bet Drink Wine Due Lune

Winemaker extraordinaire, original Rhone Ranger, racconteur, rebel, philosopher, and proponent of dry farming and bio-dynamics, Grahm has been on the cover of Wine Spectator and subject of features by NYTimes, The New Yorker magazine and much more. Join Inside Wine Santa Barbara to taste his wines and hear his story.

Among the many accolades Grahm has received:
â€¢ 2018: His Cigare Volante was named one of the worldâ€™s 10 â€œMost Unforgettable Wines of 2018â€ by Eric Asimov
â€¢ 2010: Inducted into the Vintnerâ€™s Hall of Fame by the Culinary Institute of America
â€¢ 2009: Published his award-winning book, â€œBeen Doon So Long: A Randall Grahm Vinthologyâ€; awards include:
â€¢ Best Beverage Book from the James Beard Foundation
â€¢ 2nd place â€œBest Wine Book in the Worldâ€ by Gourmand World Cookbook Awards
â€¢ â€œBest Wine Book of the Yearâ€ from Georges Duboeuf
â€¢ 1994: Named â€œWine and Spirits Professional of the Yearâ€ by the James Beard Foundation
â€¢ 1991: Inducted into the â€œWhoâ€™s Who of Cooking in Americaâ€ by Cookâ€™s magazine
â€¢ 1991: Was honored to have the â€œRhonerangerâ€ asteroid named in his honor
â€¢ 1989: Featured on the cover of Wine Spectator dressed as â€œThe RhÃ´ne Rangerâ€. The RhÃ´ne Rangers group was started by Grahm, Joseph Phelps of Joseph Phelps Winery, John MacCready of Sierra Vista Winery, Bill Crawford of McDowell Valley Vineyards, Fred Cline of Cline Cellars Winery, Steve Edmunds of Edmunds St. John and Bob Lindquist of QupÃ© Wine Cellars, among others.

In 2010, Grahm purchased 400 acres near San Juan Bautista where he is breeding 10,000 new grape varieties perfectly in tune with the terroir. His goal is to produce a veritable vin de terroir in the New World. Read Decanterâ€™s article on his project: www.decanter.com/wine-news/opinion/news-blogs-anson/randall-grahm-california-wine-354234/

He is a noted racconteur, rebel, philosopher, and proponent of dry farming and bio-dynamics.

Join the Meetup wine tasting group, Inside Wine Santa Barbara, in tasting Randall Grahmâ€™s outstanding wine at Due Lune Cucina on April 20th! Be one of the fortunate few to have this rare chance! No tickets at the door, you must RSVP here: www.meetup.com/Inside-Wine-Santa-Barbara/events/260149190/