Zoom Event: The Power of Poetry – Tapping into Your Inner Poet 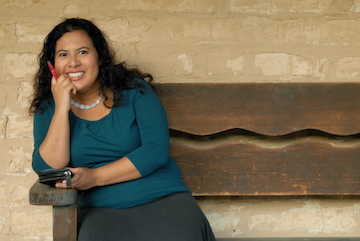 When Amanda Gorman electrified the country with her poem at the presidential inauguration in January, we knew a communications star was born!  At our AWC-SB March meeting, we will discuss what poetry can teach communicators. We will learn how writing, reading, and listening to poetry can deepen our understanding, focus our thinking, and sharpen our messages. Join us to hear from some of Santa Barbara’s most inspiring poets. Learn what drew them to poetry. Hear them read their work. And take away ideas about how the elements of poetry can infuse your work with new insight, precision, and passion.

Presenter Melinda Palacio is a poet, author, and speaker. She has lived in Santa Barbara for over 20 years. Her poetry chapbook, Folsom Lockdown, won Kulupi Press’ Sense of Place 2009 award. She is the author of the novel, Ocotillo Dreams (ASU Bilingual Press 2011), for which she received the Mariposa Award for Best First Book at the 2012 International Latino Book Awards and a 2012 PEN Oakland-Josephine Miles Award for Excellence in Literature. Her first full-length poetry collection, How Fire Is a Story, Waiting, (Tia Chucha Press 2012) was a finalist for the Milt Kessler Award, the Paterson Prize, and received First Prize in Poetry at the 2013 International Latino Book Awards. In 2015, her work was featured on the Academy of American Poets, Poem-a-Day Program. Melinda’s latest poetry collection is Bird Forgiveness, 3: A Taos Press 2018.

Opening presenter Kundai Chikowero is a senior at Dos Pueblos High School. She is a proactive activist of social justice, community empowerment of underserved populations and anti-racism. Kundai was awarded the Outstanding Youth Leader – City of Santa Barbara in 2018. She is a published poet who has won the Martin Luther King Jr. Essay and Poetry competition six times since 7th grade. Her two volumes of published poetry are grounded on equality, peace, and determination, among other themes. She has read her poems at the Santa Barbara Honors Dr. Martin Luther King Jr. events, at the Granada Theater, at a tri-county anti-bullying event for over 600 school children, at the UCSB Multi Cultural Center, at a UCSB MLK Flame event, and at the “Pondering Peace In a World of Turmoil,” a September 9-11, 2016 commemoration kickoff event at Pacifica Graduate Institute, and at Carpentaria High School. With an understanding that racism is a taught social ill, Kundai tackles this rampant problem in the Santa Barbara and California school systems by actively communicating with school administrations whenever she notices such cases by students in daily practice, particularly on social media. Kundai plans to continue her social justice work by studying law in college. She is already taking some pre-law classes at the Santa Barbara City College. Born in Zimbabwe, Kundai grew up in Canada and California, and she prides herself in the deep Chimurenga traditions of struggles for African and African-American liberation.

In the spirit of our March 3rd Power of Poetry meeting, you are invited to create a haiku describing yourself prior to the meeting—almost like a Haiku Elevator pitch. You will have the opportunity to share your haiku and listen to others in a breakout room during our meeting.

“A haiku is an unrhymed Japanese poetic form that consists of 17 syllables arranged in three lines containing five, seven, and five syllables, respectively. A haiku expresses much and suggests more in the fewest possible words.” – Merriam Webster

A haiku looks as follows: