Paul Knowlton Chapman died unexpectedly on March 20, 2022, at the age of 48, while skiing in Jackson Hole, Wyoming with his family. He is survived by his parents, Marybeth and Don Chapman of Lagun Beach; his wife, Kristie Chapman; his children, Graham and Ryan Chapman; his sister and brother-in-law, Eden and Josh Maisel of San Jose; his nephews, Weber and Tyler Maisel, as well as his extended family and an abundance of close friends. We all miss him more than words can say.

Paul was born on March 3rd, 1974, in Whittier, California and grew up in Laguna Beach. He loved surfing Thalia Street and hanging out at Bluebird beach with his buddies. When not at the beach, Paul could be found playing endless hours of many different sports, including basketball, baseball, soccer, tennis and golf. Through these sports and days spent at the Boys Club and the beach, Paul formed many strong friendships that would last a lifetime. He was a part of the Laguna community in his summer jobs and also as a statue in the Pageant of the Masters one year. Paul graduated from Laguna Beach High School in 1992 and then attended the University of California, Santa Barbara.

At UCSB, Paul was a member of the Phi Sigma Kappa fraternity and his network of friends expanded as he started to build the foundation of his life in Santa Barbara. In addition to his love of the ocean, surfing, and all sports, Paul connected with friends through his love of music. He was a founding member of the Santa Barbara Music Club and used his energy and passion to bring many others the joys of music and singing. From his teens to his forties, he attended countless concerts and would share news on upcoming bands, shows and festivals with friends and family. He played guitar, wrote his own songs and could listen to music into the late evening hours. Other than a semester abroad living and studying in Spain, Paul would always call Santa Barbara home. When he graduated from UCSB in 1997, his passion for music led to his first job in sales at the KTYD radio station.

In the years after college, Paul’s relationship with Kristie Ward grew stronger as they dated over the course of 5 years before marrying in Montecito on July 10th, 2004 beginning their new life together as husband and wife, partners and best friends. Over the next several years, they did a lot of traveling, settled into a house on the Mesa, bought a bulldog puppy Izzy and became new parents to sons, Graham and Ryan.

Paul cared deeply for people and always prioritized connections and relationships. His infectious smile, laugh, and charisma attracted people to join him in community wherever he went. As one of the first Account Executive hires at Procore in 2014, he quickly became “legendary” amongst his peers. He was the heart of the sales team coining mantras such as “We Are Us”, rallying his colleagues. Tooey Courtemache, CEO of Procore, shared that “much of Procore’s growth can be attributed to Paul’s hard work. Without his success we would not have many of our key clients today. Paul was one of our most successful Enterprise Account Executives.”

Although he excelled at his work, Paul’s true passion was his family and friends. He took these roles in life to heart – first and foremost as a devoted dad and husband, but also as a coach, friend, and confidant. With his unconditional kindness, patience, warmth, and humor, Paul’s greatest gift was making others feel known and seen / like the most important person in the room / validated / uplifted. An active member of the community, he was always the first to coach his sons’ sports, and spent countless afternoons and evenings leading their soccer, baseball, football and basketball teams. Paul loved taking his sons to Dodgers and Lakers games, carrying on the tradition he had enjoyed as a child with his parents. His enthusiasm filled every gym, field, and stadium where he clapped and cheered loudly watching games.

In addition to his love of sports, Paul’s connection to the ocean lives on with his sons, who both learned to surf at a young age with their dad on the beaches of Santa Barbara. His family would regularly bike down from their house to the Santa Barbara Yacht Club to spend time with friends and enjoy the water.

Anyone who knew Paul was touched by his smile, humor and love for life. He was a truly amazing individual who was a source of joy for so many. He is missed dearly.

In lieu of flowers and to support Paul’s family, donations may be made to Gals Give Back at https://www.paypal.com/donate/?hosted_button_id=9UHDTUJRUHLGY 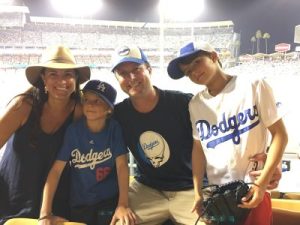