After being in business only one year, The Melting Pot’s Santa Barbara location is officially closing, much to the surprise of its over 30 employees who reportedly found they were all out of jobs Thursday morning. Melting Pot workers held a strike Friday at 5:00 p.m. at 608 Anacapa Street, the former restaurant storefront, to share their story and gain support from the Santa Barbara community. The exact reason for the closure remains unknown, but according to Melting Pot employees, managers, and corporate team members, the reason lies in a leasing dispute between new owner Charlie Haney — who recently relocated from New Jersey and was in the processes of taking over the franchise — and building landlord Jason Leggitt.

Management, food servers, hospitality specialists, and cooks held up signs yesterday reading, “Honk to Support 30+ unemployed!,” “No cheese, no Jobs,” and “Staff 4 Hire”. Robbie Stretz, a food server, is going to be moving back to his hometown this Sunday because he cannot afford to live in Santa Barbara between jobs. Robbie told The Independent that, “The corporate employees are trying to get me a job at another Melting Pot franchise, which would be very much appreciated, but I am very disappointed that I have to leave Santa Barbara.”

Amy Jarrah, hospitality specialist, is one of the youngest staff members and still lives with her parents. She was disappointed at being suddenly out of job, but said, “I am mainly here to support my coworkers, most of whom are college students who pay their own rent and cannot leave the Santa Barbara area until after they finish school. As much as it sucks for me, it is even worse for them.” Nikki Labahn, a manager of the restaurant, was purportedly caught just as unaware as the rest of the workers by the sudden Thursday closure, and was picketing right beside the other employees.

There had been a large VIP event scheduled for Friday night at The Melting Pot, and corporate employees from across the country were invited to attend. Dan Cataldo from the National Franchise Support Center flew to Santa Barbara to attend the event as did Tony Robite from a franchise in Salt Lake City. Needless to say, the event was cancelled, and neither Cataldo nor Robite were at liberty to comment on the nature of the lease dispute. The corporate employees said they were there to support the striking employees, and Cataldo stressed that The Melting Pot is a tight-knit community, claiming some employees of the Santa Barbara franchise are already being offered positions at franchises throughout Southern California. Manager Nikki Labahn confirmed that positions are being offered at different locations, but said, “Most of the employees can’t leave Santa Barbara because of school or other obligations, so we aren’t taking them”.

Charlie Haney was reportedly in the process of becoming the new owner of the franchise when the issue with the building landlord flared up. He stood aside as the employees picketed, and due to corporate restraint, could not elaborate on the dispute. “The situation with [the landlord] escalated and corporate stepped in and asked us not to say anything,” he told The Independent. While he could not elaborate on the nature of the failed lease negotiation, he surveyed the gathered employees and commented, “It’s amazing how man people are rallied around this.” Aarika Tuss, who was an employee at the restaurant, alleged that the landlords had changed the locks first thing Thursday morning, not even allowing the new owners in. Landlord Jason Leggitt was unable to be reached for comment.

The closure appears to have been as much as of a surprise to the new owners as it was to the employees and the Santa Barbara community; it was reported that there were over 200 reservations for Valentine’s Day at the restaurant. The closest Melting Pot now is in Thousand Oaks, and there is now one more empty storefront in downtown Santa Barbara. 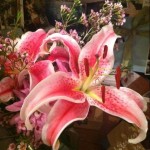 The Press Room Has Been Saved