During Fiesta weekend, children and pets ran and played underneath artwork worth thousands of dollars. Remnants of confetti from cracked Fiesta eggs and blurred glimpses of festive clothing complemented the colorful displays lining the walls around them.

In all the chaos, the vision for the Helena Mason Art Gallery was achieved: a laid-back venue space where valuable artwork and carefree attitudes can coexist.

“It’s reflective of young Santa Barbara,” said Shelby Arthur at the venue’s Fiesta celebration in August. “I feel like a lot of art spaces in town are catered toward ‘older’ tastes.” She shook her head. “Not here.”

Before opening in May, co-owners Natalie and James Sanchez worked for more than two years to make the space what it is today.

“The space sat for about 10 years as storage, so it needed some love,” Natalie said. “Our vision was to keep its Funk Zone roots while elevating the space to host art shows and offer it as a hip new event space in the heart of the Funk Zone. It definitely met our vision, but it’s not done yet.”

Although the Helena Mason Art Gallery is only months old, the building on the corner of Helena Avenue and East Mason Street has been around for generations.

“This building has been in my husband’s family for decades, with a history of tenant artists and a place to host dinner events paired with wine or even distillery tastings,” Natalie said. “Some of our local wineries and distilleries have participated.”

And the homegrown foundation of the gallery doesn’t stop at it being locally owned and operated. Almost everything — from the art to merchandise to the curatorial work — is sourced from creators in and around Santa Barbara.

“We kept going back to what the Funk Zone felt like before recent developments,” Natalie said. “We would reminisce about the local murals, Brooks students working on photo shoots, Hot Spots coffee shop that was open 24 hours, and all of the art studios in the area. That’s when we decided the space would always be open to our local artists and community.”

For their Collection Two showcase, inspired by local pop art, visitors can walk through the gallery’s wide, garage-like entrance and immediately encounter works by well-known artists Andy Warhol, John “Crash” Matos, and Yoshitomo Nara. The people behind the collection tie the otherwise global string of works back to Santa Barbara in an exhibit put together by local curators Tedde Minogue and Ashley Woods Hollister from HR Hollister.

What really pops, though, is the collection’s variety of work from local artists like Wallace Piatt, known by the arts community as Wallace.

“Shortly after our grand opening, HR Hollister approached me to show their artwork by Andy Warhol and John ‘Crash’ Matos. I knew immediately that it would pair nicely with Wallace’s artwork,” Natalie said. “I thought it was pretty cool, ’60s-’80s iconic pop art paired with a local pop art from the ’90s and ’22s.”

Wallace’s 2022 Dunk series, a collection of canvas paintings that puts a dramatic, pop-culture spin on retro Nike sneakers, draws the viewer’s eye toward the foyer’s back wall. The artist uses spray paint and house paint to create his contemporary, pop-art style pieces, some of which date back to the ’80s and ’90s.

“I’ve been following Wallace and am a huge fan of his work. While planning Collection One, I saw one of his Instagram posts showing his new work and fell in love with his Dunk series,” Natalie said. “Since his gallery is around the corner, I walked right over to see it in person and ended up buying a poster of each.”

Sculptor Rod Lathim’s piece “Sondheim’s Sunday” also piques curiosity. Made using neon lights and a French horn, the artist’s description of the piece calls the work a “marriage” of music and light, and the blending is a “magical process.” Lathim also collaborated with visual artist and Carpinteria local Chris Gocong to create pieces like “Bowie,” an acrylic portrait of David Bowie that is lit up by a neon lightning bolt across his face, displayed in the loft space located above the venue’s foyer.

The loft allows visitors to lounge and survey the open gallery space. Walk past the stairs that lead to the loft and through a doorway, and you’ll be in another gallery space fit with a bar and upstairs studio.

The two rooms and loft are available for rent as event spaces, and the studio is currently occupied by Nicole Delesalle, a local painter and friend of the Sanchezes. The walls of each room, even along the staircase, feature different works by local artists, using a variety of mediums.

“I was excited to bring in new mediums of artwork as well and was referred to photographer Josh Soskin and digital artist Lisa Trivell,” Natalie said. “The back room was then dedicated to Josh, Lisa, and Nicole.”

“The artwork we are showing from Josh is primarily from film along treasured coastlines from Hawai‘i to Mexico to our local shores here in Santa Barbara County,” she continued. “We combined that with Lisa’s digital art that’s created from her original artwork and paired with different ambient music depending on the video type. Nicole’s newest pieces that were inspired by Picasso’s cubist movement with a neutral palette and a modern feel brought it all together.”

While heading straight to the back room, visitors can take a shortcut through a narrow hallway lined on one side with an explosively colorful graffiti wall, a remnant of the years before the gallery was conceived.

“We are still uncovering all of the details of our graffiti wall but know from a previous gallery owner that the mural wasn’t up while they occupied the space, which was up to the late ’90s,” Natalie said. “We spoke with friends that were a part of the graffiti art scene in Santa Barbara and were told that the famous Andre the Giant stencil was from Obey (the work of graffiti artist Shepard Fairey) but never confirmed.”

Whether the stencil featured has such famous provenance or not, the graffiti mural alone makes the gallery worth a visit. With two collections and a few parties already under their belt, the momentum for Helena Mason shows no signs of slowing down.

Following the wrap on their second collection, the gallery is planning to show the work of celebrity photographer Markus Klinko in October, along with events for Breast Cancer Awareness Month. Learn more about the upcoming events at helenamasonartgallery.com. Gallery hours are Friday-Saturday, 2-6 p.m. and by appointment. 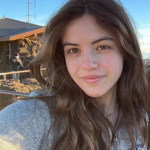