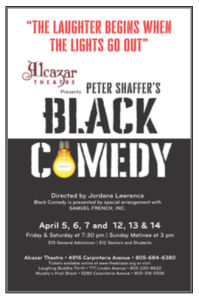 The laughter begins when the lights go out!

“Black Comedy,” a unique one act farcical comedy written by Peter Shaffer and directed by Jordana Lawrence, will be performed at the Alcazar Theatre in Carpinteria from April 5 through April 14, 2019.

The play takes place in London in 1965, where lovesick and desperate sculptor, Brindsley Miller, has embellished his apartment with furniture and objects d’arte to impress his fiancee’s pompous father. Unfortunately, Brindsley has “borrowed” his new décor from the absent antique collector next door. When his neighbor returns, just as a blown fuse plunges the apartment into darkness, Brindsley is revealed. What follows is a range of unexpected guests, errant phone cords and other snares which impede Brindsley’s frantic attempts to return the purloined items before light is restored.

The title is actually a pun, and the reversed lighting of the stage – and audience – are all part of the fun.

The Alcazar Theatre opened on April 27, 1928.  Through the ensuing 90+ years, the Alcazar changed hands and names several times, and for the past decade was known as the Plaza Playhouse Theater. It is now back to its original namesake (and is being gradually restored to its original glory). The theatre serves as a center of arts and entertainment for the entire Carpinteria Valley community.

Tickets ($15 general and $12 for seniors/students) can be purchased online at www.thealcazar.org, or at the door 30 minutes prior to show times.

The Alcazar Theatre is located at 4916 Carpinteria Avenue, Carpinteria, CA 93013.