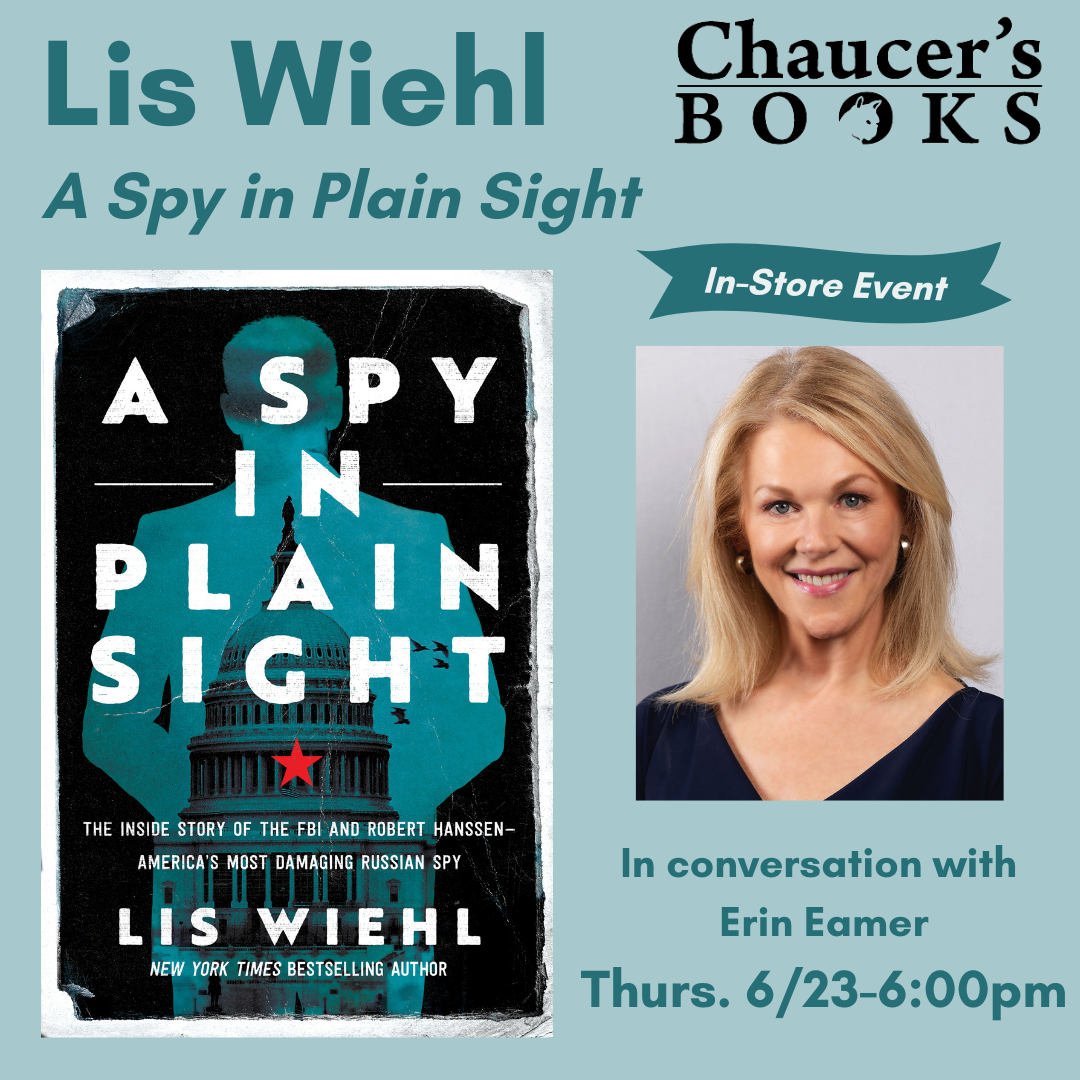 Chaucer’s Books will hold an in-store book discussion and signing with national journalist and Santa Barbara resident Lis Wiehl on Thursday, June 23 at 6 p.m.  Joining Ms. Wiehl in conversation will be Erin Eamer.

A legal analyst for NPR, NBC, and CNN, delves into the facts surrounding what has been called the “worst intelligence disaster in U.S. history”: the case of Robert Hanssen—a Russian spy who was embedded in the FBI for two decades.

As a federal prosecutor and the daughter of an FBI agent, Wiehl has an inside perspective. She brings her experience and the ingrained lessons of her upraising to bear on her remarkable exploration of the case, interviewing numerous FBI and CIA agents both past and present as well as the individuals closest to Hanssen. She speaks with his brother-in-law, his oldest and best friend, and even his psychiatrist.

In all her conversations, Wiehl is trying to figure out how he did it—and at what cost. But she also pursues questions urgently relevant to our national security today. Could there be another spy in the system? Could the presence of a spy be an even greater threat now than ever before, with the greater prominence cyber security has taken in recent years? Wiehl explores the mechanisms and politics of our national security apparatus and how they make us vulnerable to precisely this kind of threat.

Wiehl grew up among the same people with whom Hanssen ingratiated himself, and she has spent her career trying to find the truth within fractious legal and political conflicts. A Spy in Plain Sight reflects on the deeply sown divisions and paranoias of our present day and provides an unparalleled view into the functioning of the FBI, and will stand alongside pillars of the genre like Killers of the Flower Moon, The Spy and the Traitor, and No Place to Hide.

Lis Wiehl is one of the nation’s most prominent trial lawyers and highly regarded commentators. She is a regular commentator for CNN and also appears often on CBS, NPR, and other news outlets. For fifteen years, she was a legal analyst and reporter on the Fox News Channel. Prior to that she was the co-host on the nationally syndicated show The Radio Factor. She was also a tenured law professor at the University of Washington School of Law, in Seattle. Prior to joining the Fox News Channel in New York City, Wiehl served as a legal analyst and reporter for NBC News and NPR’s All Things Considered. Before that, Wiehl served as a Federal Prosecutor in the United States Attorney’s office. Wiehl earned her Juris Doctor from Harvard Law School and her Master of Arts in Literature from the University of Queensland. Wiehl is also the author of over nineteen books.

“Perhaps the best of the many books on Robert Hanssen (b. 1944), the agent who, for more than 20 years, sold American secrets to Russia. The daughter of an FBI agent, Wiehl, a former federal prosecutor and legal analyst for a variety of networks, delivers a fine account that will make readers squirm but not put it down. The author does not take the easy route by assuming that the FBI was staffed by dimwits, and her unnerving final chapter concludes that, despite some reforms, other Hanssens are not only possible; they’re probably already at work. A superb account of a long-running intelligence disaster.”
— Kirkus, Starred Review

“Wiehl relates Hanssen’s treachery in vivid, emotionally laden prose, sparing no judgment [regarding] Hanssen’s outward religiosity, sexual escapades, and utter disdain for the oaths he had taken to protect the U.S. Fans of spy stories will revel in Wiehl’s recounting of deadly serious real-life espionage.”
— Booklist

“A riveting story of one of America’s most notorious spies. Like the former federal prosecutor she was, Lis Wiehl has uncovered damning new evidence and chilling first-hand accounts of how Robert Hanssen was able to elude the FBI for twenty years. More alarming still, Wiehl shows how Hanssen’s story illustrates the very real and present danger within the FBI today. A must-read.”
— Valerie Plame, former covert CIA ops officer