Catch Me If You Can Musical at San Marcos High School 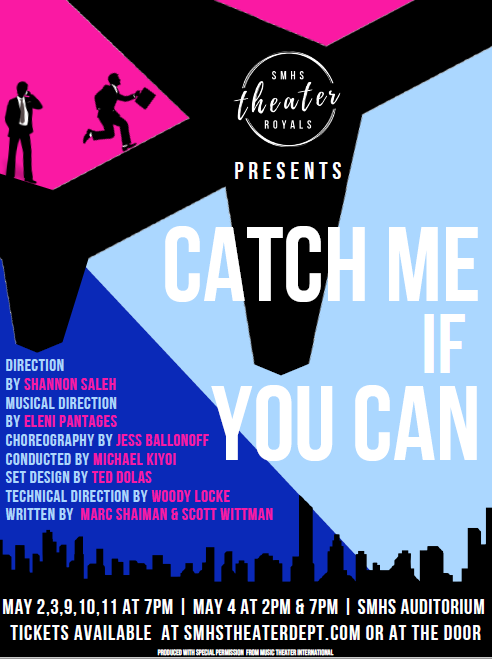 San Marcos High School Theater continues its tradition of excellence this season with the 2011 Tony nominated musical Catch Me If You Can. Based on the hit film and the incredible true story that inspired it, (Book by Terrence McNally and a swinging score by Marc Shaiman and Scott Wittman). Catch Me If You Can, is the high-flying musical comedy about chasing your dreams and not getting caught, and plays at the Marquis Family Theater at San Marcos High School in May.

Catch Me If You Can captures the astonishing true story of Frank Abagnale, Jr. (played by Dillon Stave), a world-class con artist who passed himself off as a doctor, a lawyer and a jet pilot—all before the age of 21. With straight-arrow FBI agent Carl Hanratty (played by Jack Boyd) on Frank’s trail, we’re off on a jet-setting, cat-and-mouse chase, as a jazzy, swinging-sixties score keeps this adventure in constant motion. In the end, Agent Hanratty learns he and Frank aren’t so very different after all, and Frank finds out what happens when love catches up to a man on the run.

The show is under the direction of Shannon Saleh with choreography by Jess Ballonoff and music direction by Eleni Pantages and will be conducted by Michael Kiyoi.  Technical director Woody Locke and Lighting and Set Designer Ted Dolas, with Marian Azdril on costuming, complete the Production team.

Performances run at 7:00pm Thursday-Saturday May 2nd, 3rd, 4th and the 9th, 10th and 11th. There is an additional matinee on Saturday May 4th at 2pm. Tickets can be purchased online at smhstheaterdept.com, at sanmarcos@sbunified.org,    Tickets are also available at the door.