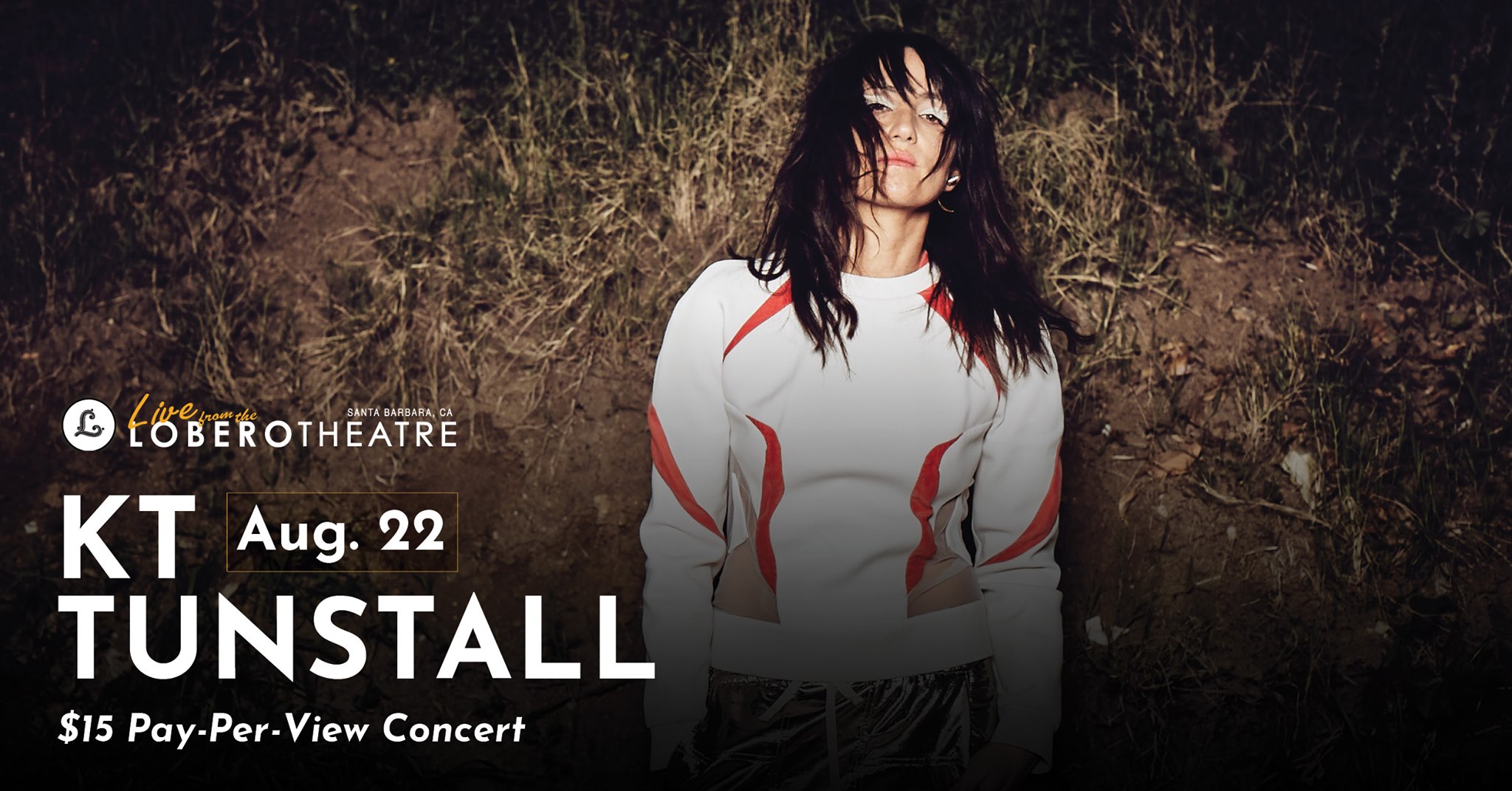 On Saturday, August 22 Santa Barbara’s historic Lobero Theatre will host a special Pay-Per-View concert featuring KT Tunstall. The live-streamed performance is the second show in The Lobero’s series of specially-priced, live-streamed concerts which take place without an audience, with strict safety and COVID-19 sanitation protocols in place.

Grammy nominated for Best Female Pop Vocal Performance and world-renowned for her songs like “Suddenly I See” (used in “The Devil Wears Prada”) and “Black Horse and a Cherry Tree,” Tunstall hails from Scotland, but has toured the world over. In the past few years, she has toured with The Pretenders, Barenaked Ladies and Hall and Oates amongst others. Her latest studio album, 2018’s “WAX,” has received international acclaim; with a focus on the electric guitar. Get ready to dance in your living room to KT’s mesmerizing electric and intimate solo virtual concert. Please help save live music and the places it lives.

Tickets for KT Tunstall’s concert are $15 and will be available at The Lobero Theatre’s website on Monday, August 10. The viewing window for the show will begin at NOON PDT / 8 pm BST on August 22. Ticketholders will be able to view the concert using Vimeo anytime within 72 hours after the show. Those who are able to make a donation to support the live music experience at the Lobero Theatre and other venues around the country are welcome to contribute more when they purchase their tickets. Proceeds from the show will go towards supporting the Lobero Theatre and a donation will be made to NIVA, the National Independent Venue Association.

Singer-songwriter, KT Tunstall enchants and engages with every song, and that’s why she continues to resonate not only among fans, but throughout pop culture at large. Scotland born and now Los Angeles-based, KT Tunstall emerged with her 2004 classic debut Eye To The Telescope which featured international hits “Black Horse and the Cherry Tree” and “Suddenly I See,” which won the Ivor Novello Award for Best Song in 2006. That same year she won her first BRIT Award for Best British Female Artist, and earned Grammy and Mercury Prize nominations in 2007. KT has also been awarded the Inspirational Artist gong at the Women In Music Awards and was chosen as the first-ever female Grand Marshal (following the likes of Sir Sean Connery) to lead April 2018’s annual New York Tartan Week parade. Earlier this year, KT Tunstall headlined shows in the U.S., including sets at New York’s legendary Madison Square Garden – supporting Hall and Oates, and performed with Jools Holland across Europe.

KT Tunstall has released six acclaimed albums to date: Eye to the Telescope (2004), Drastic Fantastic (2007), Tiger Suit (2010), Invisible Empire // Crescent Moon (2013), KIN (2016) and WAX (2018). Additionally, she has written songs featured on major motion picture soundtracks including “Boy” for The Kid, “Miracle” for Winter’s Tale, “We Could Be Kings” for Million Dollar Arm and more, cementing her reputation as a major recording talent, as well as a mesmerizing live performer.

Live from the Lobero Producer/Director Byl Carruthers brought The Lobero a concept of “contactless performances” to be live-streamed as inexpensive Pay-Per-View concerts. Carruthers says, “Since the pandemic started, the artists’ free “live streams-from-home” have helped us all get along, but venues and artists need a sustainable model to survive!” He adds, “We’re hoping to create a template that can work for The Lobero, and others, as well.”

Carruthers’ safety-centric production model involves a forensically small crew using various assigned entrances. In addition to PPE, temperature, and symptom checks while entering the building, all crew members will bring their own food and remain in their specific space for the entire production. Some of the technicians perform their tasks from individual rooms. Others never come within 15 feet of the artists. They are only to leave their room, or position, to use one of the eight assigned bathrooms and stalls. After set-up, the day before show day, the stage, doors, hallways, and rooms, will all be disinfected to meet COVID-19 sanitation guidelines. On show day, no one other than the artist(s) walks on to the performance stage. Artists arrive through stage doors and take their place on-stage, perform, and exit, without making any contact with the crew.