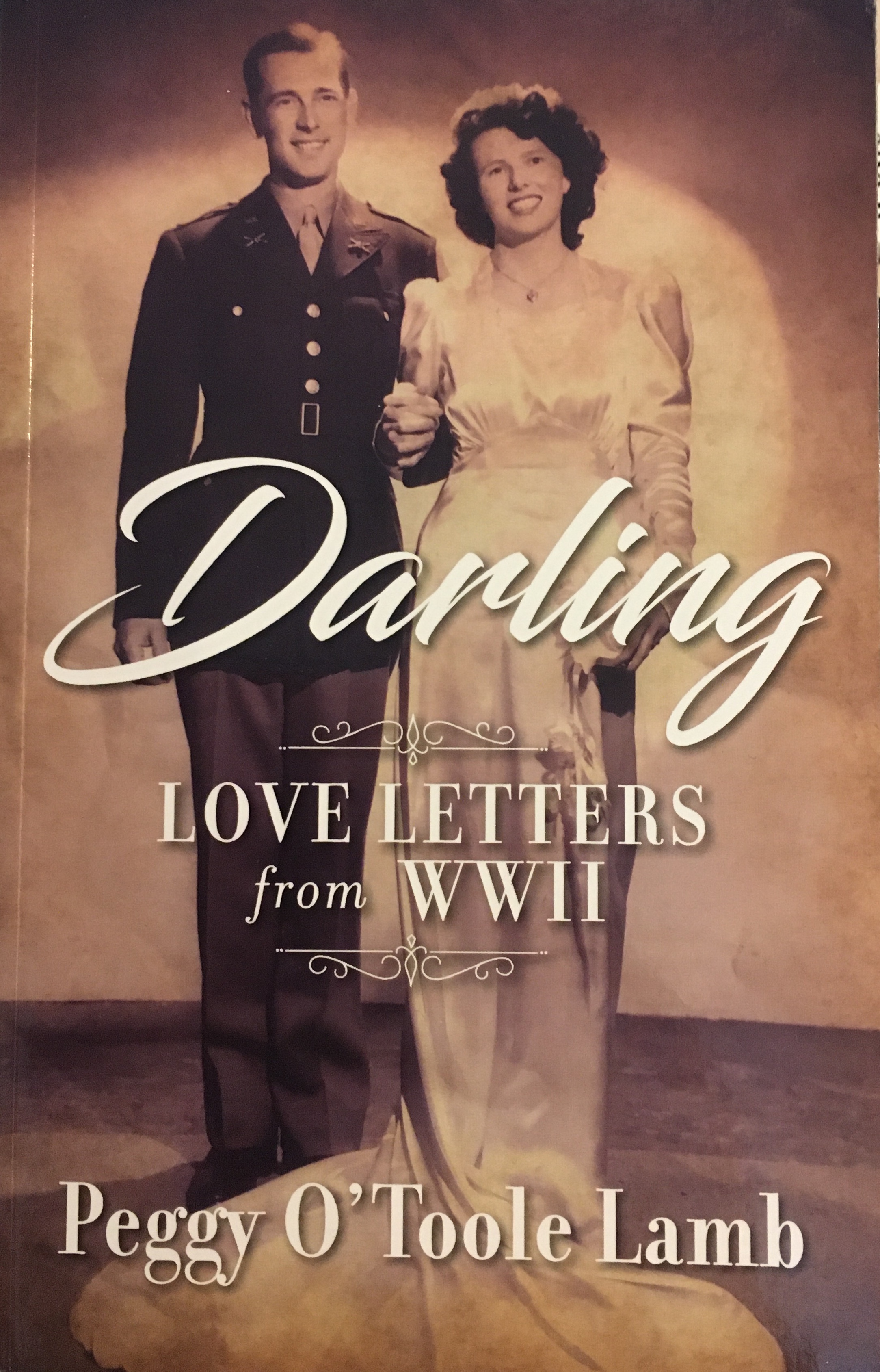 On Thursday September 17 (6:30 pm), please join us for a virtual book talk with local author Peggy O’toole Lamb, when she discusses her book “Darling: Lot Letters from WWII” with Chaucer’s Books!

During WWII, Lieutenant Frank J. Foster wrote letters to his wife, Catherine, who kept them hidden in a tin box not to be found until 2015 after her death. During the war, the soldiers’ letters were censored for security reasons. Therefore Frank’s communication reveals little about the war, rather more about his love and longing for home and family. Frank had lived in an orphanage as a child and always wanted a family and he feared he may not return to his wife and child. Still, he had a duty to his country and was determined to fight for freedom against the Nazis. He had lost touch with his two brothers and sister until they resurfaced during the war, and even then, the relationships were strained.
In 1942 Frank was conscripted into the army and soon rose to First Lieutenant in Patton’s Third Army. After grueling training in the Anti-Aircraft Artillery (A.A.A.) in the Desert Training Center, Frank shipped out to the European Theater of Operations in April 1944. He left his new wife Catherine and their newborn son John after only holding his child for an hour in the hospital.
The author, Peggy O’Toole Lamb, researched the classified Army Morning Reports to detail the date and location of Frank’s battalion, the 546th A.A.A., during the war. She gathered information from Patton’s writings and diary, and the Third Army’s After-Action Reports to find what had happened during the battles and campaigns and cross-referenced with the dates of his letters. Frank spared Catherine, Kitty, the gruesome details of war, instead he shared stories of camaraderie, the beautiful countryside, and his longing for her and his son. Lamb gives the details he left out.
Lamb uses the letters to look through Frank’s lens and writes as if he is telling the story, expressing feelings of happiness, sadness, frustration, anger, and love. Darling captivates the reader as if the action is happening in the present time, never knowing when it will all end.

Author Peggy O’Toole Lamb is a nonfiction writer. Darling researches the words behind the letters written by her uncle to her aunt during WWII when he fought in the European Theater as a First Lieutenant in Patton’s Third Army. Her first book, Then I Won’t Seem So Far Away, recreates the wanderlust of a student in 1970 in Europe from letters sent home to her mother. Lamb has an uncanny ability to dig into the past and recreate a true story that reads like a novel. She lives in Santa Barbara, California
Previous Event Next Event