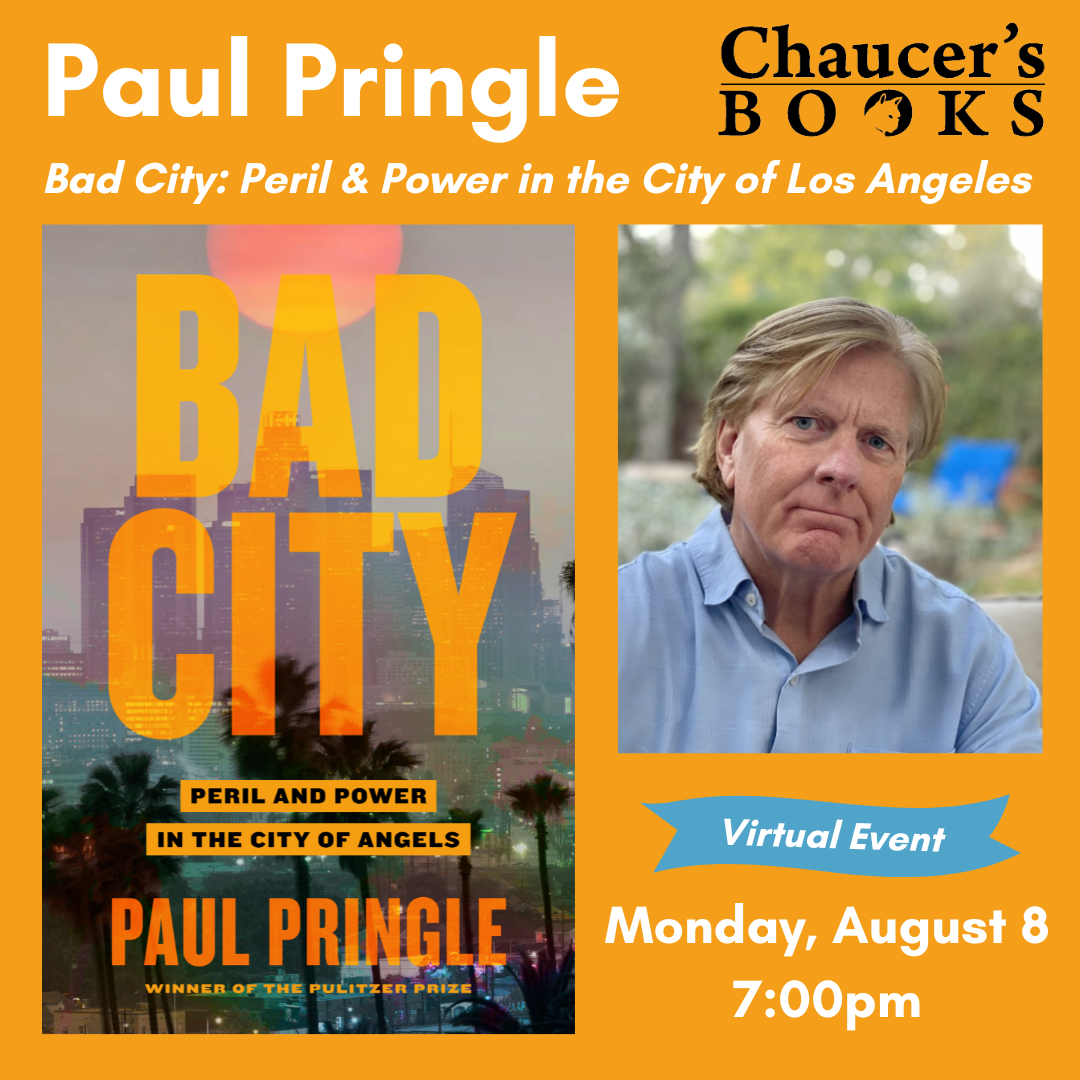 Please join Chaucer’s Books via Zoom (and on YouTube!)  for a virtual author talk with Pulitzer Prize winning journalist Paul Pringle, the author of BAD CITY: PERIL AND POWER IN THE CITY OF ANGELS on Monday, August 8 at 7 p.m.

For fans of Spotlight and Catch and Kill comes a nonfiction thriller about corruption and betrayal radiating across Los Angeles from one of the region’s most powerful institutions, a riveting tale from a Pulitzer-prize winning journalist who investigated the shocking events and helped bring justice in the face of formidable odds.

On a cool, overcast afternoon in April 2016, a salacious tip arrived at the L.A. Times that reporter Paul Pringle thought should have taken, at most, a few weeks to check out: a drug overdose at a fancy hotel involving one of the University of Southern California’s shiniest stars—Dr. Carmen Puliafito, the head of the prestigious medical school. Pringle, who’d long done battle with USC and its almost impenetrable culture of silence, knew reporting the story wouldn’t be a walk in the park. USC is one of the biggest employers in L.A., and it casts a long shadow.

But what he couldn’t have foreseen was that this tip would lead to the unveiling of not one major scandal at USC but two, wrapped in a web of crimes and cover-ups. The rot rooted out by Pringle and his colleagues at The Times would creep closer to home than they could have imagined—spilling into their own newsroom.

Packed with details never before disclosed, Pringle goes behind the scenes to reveal how he and his fellow reporters triumphed over the city’s debased institutions, in a narrative that reads like L.A. noir. This is L.A. at its darkest and investigative journalism at its brightest.

Paul Pringle is a Los Angeles Times reporter who specializes in investigating corruption. In 2019, he and two colleagues won the Pulitzer Prize in Investigative Reporting for their work uncovering the widespread sexual abuse by Dr. George Tyndall at the University of Southern California, an inquiry that grew out of their reporting the year before on Dr. Carmen Puliafito, dean of USC’s medical school. Pringle was a Pulitzer Prize finalist in 2009 and a member of reporting teams that won Pulitzer Prizes in 2004 and 2011. Pringle won the George Polk Award in 2008, the same year the Society of Professional Journalists of Greater Los Angeles honored him as a distinguished journalist. Along with several colleagues, he shared in Harvard University’s 2011 Worth Bingham Prize for Investigative Reporting. Pringle and a Times colleague won the California Newspaper Publishers Association’s Freedom of Information Award in 2014 and the University of Florida’s Joseph L. Brechner Freedom of Information Award in 2015. Pringle lives in Glendale, California.

“Paul Pringle’s Bad City is an earth-shattering tale of appalling institutional corruption—and the inspiring reporters who overcame shocking obstacles to bring the truth to light.”
—Robert Kolker, #1 New York Times bestselling author of Hidden Valley Road and Lost Girls“A Los Angeles noir caper come to life, Bad City grabs you from the very first sentence and doesn’t let go. A remarkable reporting achievement.”
—Chris Hayes, host of All In with Chris Hayes and New York Times bestselling author of A Colony in a Nation“The salacious tale of a major university mired in scandal…[and] the newsroom drama is as juicy as the dramas at the university… A brisk chronicle of sex, lies, and betrayal.”
—Kirkus Reviews
Previous Event Next Event