The return of more than 15,000 monarch butterflies to their groves in Goleta strengthened the hope that the monarch’s population is increasing. But to keep that trend going, nearby gardeners are asked to eliminate milkweed in areas where the butterflies remain for the winter.

After what seemed to be a hopeless 10-year plight, monarch numbers were higher this year, but concerns for a potential drop in the future were not diminished. “For the casual observer, an increase in interest has arisen, but for those who have been dedicated to the return of the butterflies, they are still at a shocking value,” said George Thomson, who manages the park and open space at Ellwood Mesa. In 2011, the monarch population at Ellwood was 70,000, an enormous difference from this year’s migration.

Thomson said the problem was not unique to Santa Barbara because of issues related to climate. The overarching drought affects their likelihood to return as eucalyptus trees are not providing the proper nutrients or microclimate for the monarchs to survive the winter.

Also, milkweed is proving to be more of a problem than a help, according to a number of studies in the past few years. For decades, people have been told to plant the pale, flowering stems to help feed and encourage the monarch population. The Xerces Society, which lists butterflies among its invertebrate concerns, has been publicizing that it is important to be aware of where and where not to plant milkweed. If milkweed is planted too close to the coast, it can force the monarchs’ migration to end early. “Planting milkweed is important, but also in the right places,” said Deborah Seiler, director of communications at the Xerces Society.

“We are combating years of public education that told us to plant milkweed to save monarchs, but it is the wrong message, as milkweed is detrimental to certain phases of the monarchs’ migration pattern and lifecycle,” Thomson affirmed. “Our butterfly biologists recommend milkweed should not be planted on this side of the Santa Ynez Mountains since it can interrupt their spring migration,” he said. “Basically, the milkweed keeps them here into the summer when they should be on their way inland and up to the Great Basin region.”

That apparently didn’t happen this year, as the majority of Goleta’s butterflies are now on their spring migration inland. The monarchs have been monitored and were considered for the Endangered Species Act (ESA) in 2020. After being passed over in December 2020 for other higher-priority endangered listings, monarchs will be reviewed annually until 2024 by U.S. Fish and Wildlife.

Thomson encourages the public “to become an observer and active participant in nature and be able to read a plant through what it needs to survive and thrive.” He’ll be planning community days at Ellwood Mesa so more people can get involved, but until then, he suggested to leave off planting milkweed in coastal areas. Equally important was to abandon the use of pesticides in landscapes and backyards where butterflies visit.

Some monarchs are still clinging to the ends of branches in clusters until they all depart by early March. The Goleta Monarch Butterfly Grove at Ellwood Mesa is a 20-minute walk from the parking lot on 7701 Hollister Avenue. 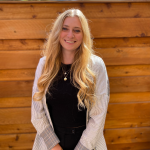 Santa Barbara Birding: The Galapagos of the North

Where Do Sandhill Cranes Winter in a California Drought?