For our annual review of stories, some of the Indy’s writers and editors have put together lists of the stories they were proud of this year, or just had fun writing or reading. Here are Copy Editor Tessa Reeg’s picks.

A New Hope with Biden and Harris by Nick Welsh — I can’t be the only one who breathed a huge sigh of relief at the election results. Nick really captured the thoughts that I’m sure were running through the heads of Americans all over the country.

Inside the Organized Chaos of Santa Maria’s COVID ICU by Tyler Hayden and Daniel Dreifuss — As heart-wrenching as the photos are, the awareness they brought to readers was so valuable. The doctors and nurses working with COVID patients everywhere deserve so much appreciation.

Gauchos Will Take On Creighton in NCAA Tournament Opener by John Zant — At least my favorite sports teams were doing well, despite the circumstances! UCSB’s men’s basketball team won the 2021 Big West tournament, and they made it to the NCAA tournament for the first time in 10 years.

Santa Barbara’s Pets & Animals: From Fur Babies to Working Stiffs by Indy Staff — From the pets who found new homes during the pandemic to the dogs working to sniff out COVID and my personal favorite, a penguin named Monty from the S.B. Zoo who now has his own book about his adventures, our annual Pets & Animals issue brought some much-needed cheer to readers and staff alike.

What to Read, and Why, This Summer by Indy Staff — As a bookworm, I always enjoy our annual Books issue, and this one didn’t disappoint. From a true story about the role bicycles played in early-20th-century feminism to a list of thrillers guaranteed to get your mind working, this issue featured plenty of titles that I found myself scrawling on my “to read” list.

Be the Mermaid by Maggie Yates — Did you know that mermaid modeling is a thing? I sure didn’t, but I had fun reading this piece about a whole genre of modeling and underwater photography, as well as the training and practice that goes into it to get that perfect shot.

Santa Barbara’s Own Foo Fighter by Marko DeSantis — Somehow, I’ve enjoyed the Foo Fighters’ music for years without ever knowing that one of them is from Santa Barbara! This piece about the life and success story of Chris Shiflett was a fascinating read for any rock ’n’ roll fan.

And last but not least: Rare Amur Leopard Cub Born at Santa Barbara Zoo by Ryan P. Cruz. Since Amur leopards are so endangered, it’s such good news that little Marta has been doing so well, and it’s amazing to watch her play and grow on the zoo’s Instagram page! 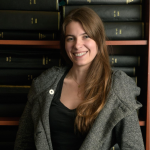 Knowledge and Knowing in Neo-Confucianism